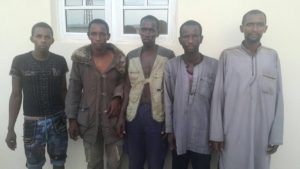 The Nigeria Police Force in its renewed determination to rid the society of crimes and all forms of criminality, has arrested five of the suspects involved in the midnight raid on Nimbo community in Uzo-Uwani Local Government Area of Enugu State on 25/04/2016, as operatives of theIGP’s Intelligence Response Team (IRT) based on credible technical intelligence swooped on them.

The IGP’s IRT, based on the intelligence gathered on the attack, arrested the following suspects viz: Mohammed Zurai, Ciroma Musa, Sale Adamu, Suleiman Laute and Haruna Laute, and recovered one Gionee L88 mobile phone with memory card containing the video recording of the massacre in the community.

Also, the Team on the 06/05/2016 busted a 3-man syndicate of deadly bank robbers/kidnappers and recovered arms, ammunition, dynamites and rifle servicing tools from them. The gang members, Gogo Daniel Ume, Ikado Michael and Ifeanyi Kalu had been terrorizing Rivers, Imo and Enugu State, respectively. 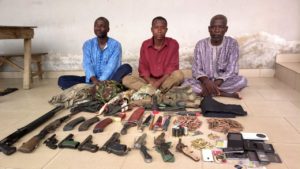 In continuation of the IRT anti-kidnapping operations in Kaduna State, the team on 20/05/2016 as well arrested Babangida Ibrahim; Idris Abubakar and Idris Mai Anguwa in the State for allegedly involved in kidnapping and robbery, while different caliber of weapons were also recovered from the bandits.

The Inspector-General of Police, IGP Solomon E. Arase, fdc, NPM, has observed with satisfaction the high sense of patriotism and professionalism with which the members of the IGP’s IRT have carried out their duties so far. He stated that the IRT relies on vital information made available to the Police by the public and attributed the recent break-through to the growing trust and cooperation between the Force and the public.

The IGP assured Nigerians that the Police will remain dynamic and creative in formulating new strategies for fighting crimes and criminality and urged Nigerians to continue to support the Force.