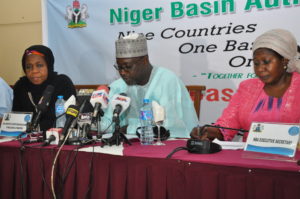 The Federal Government of Nigeria has called on the member countries of Niger Basin Authority (NBA) to promote the solidarity that binds them together in line with the will of NBA’s founding fathers.
The Hon. Minister of Water Resources and Chairman of NBA Council of Ministers, Engr. Suleiman H. Adamu, FNSE stated this at the Expert meeting of the Extraordinary Session of the Council of Ministers on Thursday 26th May, 2016 in Abuja.
It could be recalled that the mandate of the NBA is to “promote cooperation between member countries sharing the active water shed of the River Niger in the areas of energy, water, agriculture, livestock development and fish farming.
Engr. Suleiman noted that Nigeria being a pioneer member of the organization, has actively promoted the basin’s natural resources in a sustainable manner based on the shared vision to improve the living standard of the people of the basin.
Also, the Minister called on all the member countries to live up to their financial responsibilities by paying up their dues regularly to enable the Secretariat exercise its sovereign functions of coordination, monitoring and evaluation of investment actions and capacity building.
He added that a note for a new sharing formula of member countries’ contributions to the NBA’s operating budget would be discusses at the Expert Meeting to enable NBA’s cash flow situation as this would strengthen solidarity among member countries.
While thanking His Excellency, President Muhammadu Buhari, current President of the Summit of Heads of State and Government of the Niger Basin Authority for accepting to host the Extraordinary Session of the Council of Ministers; the Minister charged the members of committee of Experts to discuss the content of documents submitted dispassionately bearing in mind the interest of the basin populations in promoting solidarity between our countries in line with the will of NBA’s founding fathers.
In her remarks, the Executive Secretary of the NBA, Her Excellency TouptaBoguena, said that member countries should endeavour to endow the common Institution with the human and material resources necessary for effective implementation of the programmes so as to strengthen cooperation between member countries in improving the living standard of the over 130 million people of the basin.
“It is also up to us, as member countries, to show once again our desire to belong to the same family and walk hand in hand for the benefit of our people”, she charged.
Margaret E. Umoh
Director (Information and Press Relations)
FMWR