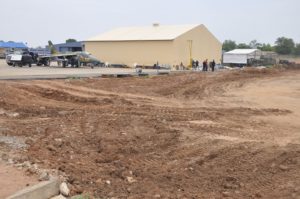 The Nigerian Air Force (NAF), as part of preparations towards inducting new platforms, is expanding the apron at the military wing of Yola International Airport to enhance air operations against insurgency in the Northeast. The NAF, at present, is at the verge of inducting the Mi-35M helicopter gunship and JF-17 Thunder Fighter Ground Attack aircraft in addition to acquiring the Super Mushshack trainer aircraft. There are also strong indications that the US Government may give the nod sooner than expected with regards to the sale of Super Tucano to the NAF to replace the aging Alpha Jets.
The proposed fleet expansion, according to the Chief of the Air Staff, Air Marshal Sadique Baba Abubakar necessitated the expansion of existing facilities including the apron, pilot crew room, office/residential accommodation and recreation facilities newly put-in place to enhance the welfare of the personnel and reposition the NAF for effective and efficient air operations. Commissioning the new projects, the Executive Governor of Adamawa State, His Excellency, Senator Muhammad Umaru Jibrilla Bindow lauded the NAF for the commitment towards enhancing the welfare of its personnel. Senator Bindow noted that the projects are testaments to the high premium the NAF places on the welfare of its personnel and prudent management of resources by the incumbent leadership. Governor Bindow also applauded the NAF for its contributions to the counterinsurgency operations with a promise to continue to work with the Service to achieve more successes.
In a similar development, the CAS, Air Marshal Abubakar also used the opportunity of his operational visit to Maiduguri to commission a new block of transit accommodation constructed for officers. Meanwhile, in furtherance of NAF humanitarian support for Internally Displaced Persons (IDPs) in the Northeast, another batch of 70 persons have benefitted from the free eye surgery undertaking by the NAF. The latest beneficiaries followed the first batch of 50 IDPs operated upon by NAF medics in Maiduguri. So far, the NAF has provided free medical care for over 30,000 victims of the Boko Haram insurgency in the Northeast.
You are please requested to disseminate the information through your mass medium for the awareness of the general public. Thank you for your usual support and cooperation.
AYODELE FAMUYIWA
Group Captain
Director of Public Relations & Information
PRNigeria encourages institutions to be transparent in their information management as it provides news items from authoritative sources for free use by the media