Home National FG To Address Spate Of Illicit Drug Peddling And Consumption In The... 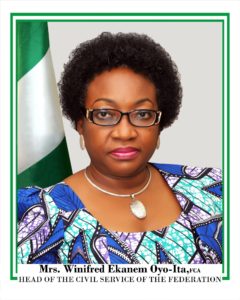 Worried by the increased spate of illicit drug peddling and consumption across the country, the Federal Government said that concerted effort will be put in place to salvage the country from its negative consequences,
The Head of the Civil Service of the Federation Mrs. Winifred Oyo-Ita disclosed this recently in her Office in Abuja during a courtesy visit by the National Assembly Joint Committee on Drugs and Narcotics lead by its Chairman, Senator Joshua Lidani.
Mrs. Oyo-Ita expressed worry over the increased in domestic violence and other related crimes across the country in recent times attributed to the consumption of illicit drugs and narcotics among the unemployed youths.
She emphasized that the case of consumption of illicit drugs by our unemployed youth is alarming, “it is very critical and the reality on ground is quite disturbing with the rate of crime particularly domestic violence is increasing as a result of the consumption of hard drugs by these youths, the productivity is so low. So something urgent must be done to salvage the situation.”
The Head of Service stated further that government will do everything humanly possible to strengthen relevant agencies of government charged with the responsibility of enforcing narcotic laws in the country in order to salvage the country from negative consequences of illicit drug peddling and consumption. She advised the National Assembly Joint Committee on Narcotics to meet with the relevant MDAswith the view to finding urgent and best way to enhance the relevant agencies with the capacity it requires in combating the scourge.
Earlier, the National Assembly Joint Committee Chairman on Drugs and Narcotics, Senator Joshua Lidani, said that the agency of government that is vested with the responsibility of fighting the scourge of narcotics and illicit drugs needs to boost its manpower and training to combat the rising tide of drugs and narcotics consumption, which he said has adversely affected the youth, who are most productive segment of the society.
He appealed to the Federal Government to redouble its efforts towards fighting the scourge, noting that the present manpower of the National Drug Law Enforcement Agency needs to be strengthened to salvage the country from the negative consequences of illicit drug peddling and consumption.
SIGNED
Mohammed Manga
Assistant Director (Media Relations)
For: Head of the Civil Service of the Federation