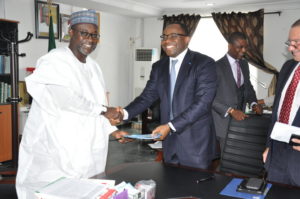 The Federal Government has signed a memorandum of Understanding (MoU) with the Nigerian Sovereign Investment Authority to explore the investment opportunities especially in commercialized agriculture to boost food production in the country.
The Minister of Water Resources, Engr. Suleiman H. Adamu, FNSE, at the signing ceremony between Federal Government and NSIA on Thursday 23rd July, 2016 in his office, said that the MoU is a positive milestone as it is in line with government objectives and determination of investing in agriculture for food security.
He said, “30 years from now, the population of Nigeria would out grow food production, so we need to start to address the issue to avoid conflict of food shortage in the future.” He therefore called on investors to look inward in exploring the many opportunities in the sector and develop the potentials to the fullest.
Also, Adamu reiterated the commitment and confidence of the Steering Committee on the partial commercialization of the River Basins for optimal performance. He stated that the signing of the MoU with NSIA is in line with the objectives of the Steering Committee’s mandate. He therefore said that they should not be seen as working at cross purposes.
He added that apart from commercialized agriculture in the sector, there are other opportunities in the sector especially the development of small hydro power schemes for power generation by using the available dams.
Meanwhile, the Managing Director/Chief Executive Officer of the Authority, Mr. Uche Orji, in his remarks at the occasion said, that Water and Agriculture is pivotal to the food security agenda of the present administration.
He said that the organization has access to capital and would do it best in the commercialization of the capital projects of the ministry for optimal benefit of the country.
The Nigeria Sovereign Investment Authority is a Nigerian establishment which manages the Nigeria Sovereign Wealth Fund (SWF) into which the surplus income produced from Nigeria’s excess oil reserves is deposited. This Fund was founded for the purpose of managing and investing on behalf of the government ofNigeria.
Present at the signing ceremony were, the Hon. Minister of Water Resources, Engr. Suleiman H. Adamu and management staff of the ministry, the MD/CEO and his management team and the Acting Director General of the Bureau of Public Enterprises, Dr. Vincent Akpotaire and management staff of the Bureau.
Margaret E. Umoh
Director (Information & Public Relations