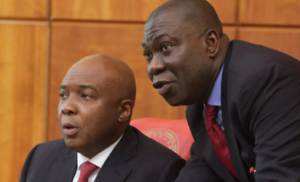 A Federal High Court in Abuja has ruled that the forgery charge brought against the Senate President Dr. Bukola Saraki, his deputy senator Ike Ekweremadu and two others by the Attorney General of the Federation (AGF) and Minister of Justice Mr. Abubakar Malami SAN is a complete gross abuse of court and legal process.

The court faulted the charge for being filed during the pendency of a civil action instituted to challenge the propriety of the police report on the alleged forgery of the Senate Standing Rule 2015 and in which the AGF and the Inspector General of Police (IGP) are defendants and even joined issues with plaintiff in the court action.

Justice Gabriel Kolawole who ruled in a motion ex parte motion filed by Senator Gilbert Emeka Nnaji seeking to stop the implementation of the police report on the forgery held that the forgery charge against Saraki, Ekweremadu and others was done in a desperate haste that was not in the public interest.

Senator Nnaji had on July 23, 2015 instituted a civil action against the Inspector General of Police and the AGF at the Federal High Court wherein he challenged the propriety of the police report on the alleged forgery of the Senate Standing Rule.

He later filed a motion ex-parte in which he asked for court order to stop the IGP and AGF from taking any step on the police report pending the determination of his originating summon and which the court partly granted.

Senator Hunkuyi who wrote the petition that brought the police report had engaged Abubakar Malami SAN, then as a private lawyer, as one of his counsels that filed a motion for him (Hunkuyi) to be joined as one of the defendants in the suit.

As at press time, the name of Abubakar Malami (SAN) is still reflecting as one of the counsels representing Senator Othman Hunkuyi at the Federal High Court, Abuja and the case has been adjourned to July 6, 2016 by Justice Gabriel Kolawole.

The Judge said that he would have nullified the forgery charge filed by the AGF before an Abuja High Court and set it aside for being a gross abuse of court and legal process if it had been filed before his court.

Justice Kolawole said that the actions of the IGP and AGF whose offices are created by law were in bad taste because his court had in the civil action asked parties not to do anything on the police report during the pendency of the civil suit so as not to render the civil action nugatory and cause faith accomplished.

The Judge specifically took swipe at the AGF who he said, ought to use his power under the law to terminate any charge filed in breach of court process but found himself as a promoter of abuse of legal process.

The AGF, the Judge further said, acted in bad faith because before his appointment as AGF, he was one of the leading lawyers to Senator Suleiman Othman Hunkuyi who authored the petitions upon which the police report was prepared and upon which the forgery charge initiated by the federal government was predicated.

By his involvement as a private lawyer in the civil matter to the petitioner (Senator Hunkuyi) before the criminal charge was preferred against the defendants, he (AGF) ought to have realized the pendency of several court actions on the issues and ought to have used his office and law to terminate the flagrant abuse of the legal process.

“By reason of the provisions, it is not out of place, to describe the 1st defendant as the “Chief Law Enforcement Officer of the Federation”.

“The Plaintiff’s “motion ex parte” dated 23/6/16 is one that seeks restraining orders against these two (2) constitutional offices created by the constitution. Both are connected with law enforcement and by extension, due administration of justice”.

“Section 174(1): “The Attorney General of the Federation shall have power- “to take over and continue any such criminal proceedings that may have been instituted by any other authority or person; and to discontinue at any stage before judgment is delivered any such criminal proceedings instituted or undertaken by him or any other authority or person”.

“The criminal charge dated 10/6/16 attached as Exhibit “B” to the plaintiff’s “motion ex pate” is a criminal process filed on behalf of the 2nd defendant by D.E. Kaswe, Esq. who signed the said charge as a “Principal State Counsel” for “The Honourable Attorney-General of the Federation and Minister of Justice” was listed as one of the leading Senior Advocates of Nigeria who filed the “motion of notice” attached as Exhibit “D” to the plaintiff’s ex parte application and it was an application by which Senator Suleiman Othman Hunkuyi, who until the learned Attorney-General of the Federation was appointed as the Minister of Justice, was his erstwhile client”.

“In the “list of witnesses and their addresses”, Senator Suleiman Othman Hunkuyi, who wrote the “Petition” to the 1st defendant on 30/6/15 – as the Secretary of “The Unity Forum” in the Senate is listed as No. 1 of the witnesses to be called by the state on the criminal charge dated 10/6/16 which was filed whilst the instant proceedings are still pending”.

“When I read the provisions of section 174(1) – (3) of the constitution, as amended, I am not in any doubt, that by section (174(2) of the constitution, that D.E. Kaswe, Esq. who signed the criminal charge in Exhibit “B” as “principal state counsel” did so on the authority of the 2nd defendant”.

“Having regard to these issues, I asked myself what is the appropriate order this court can make given these peculiar facts of the involvement of the current occupant of the office created by Section 150(1) of the constitution – who “doubled” as it were, as one of the leading Counsels to the “Petitioner”, Senator Suleiman Othman Hunkuyi and fortuitously, was appointed by the President as the Minister of Justice?”

“When I reflected on the Supreme Court’s decision in the State and Ilori, my view is that this court is somehow handicapped, in being able to query the 2nd defendant’s decision and the power he exercised pursuant to section 174(1)(a) of the constitution to initiate the criminal charge attached as Exhibit “B” to the Plaintiff’s “motion ex parte” as any issue which this court may raise as regards the propriety or otherwise of his doing so, will eventually, when shorn of all legal niceties, border on “moral considerations”.

“Although, when this section is read communally with section 174(3), it is arguable that Section 174(1)(c) is to be read with the “need to prevent abuse of legal process” in section 174(3) of the constitution”.

“The converse situation, which the drafters of the constitution, perhaps never envisaged appears to have occurred in this case as the 2nd defendant who is required, by section 174(3) of the constitution, to “discontinue at any stage before judgment is delivered on any such criminal proceedings instituted or undertaken by him or any other authority or person” where such proceedings constitute “abuse of legal process”, is in fact the very person who initiated a criminal proceedings in a matter in which he had, as a private legal practitioner, acted for the one of the “interested” Senators who had petitioned the 1st defendant on 30/6/15”.

“Regardless of whichever way it is looked at, I will still hold the view, that constitutional powers conferred on all persons and authorities, including arms and agencies of government are required to be exercised in good faith and where as in this instance, it relates to the institution of criminal proceedings, it must be seen to have been properly exercised strictly in “public interest”.

“But, having regard to the peculiar facts which I have analyzed, the said criminal charge dated 10/6/16 and attached as exhibit “B” to the plaintiff’s “motion ex parte” dated 23/6/16, given the course of these proceedings as I had in detail, highlighted, can only be seen as one that constitutes an “abuse of legal process” to use the very words in section 174(3) of the constitution”.

“In all of these facts and issues, having regard to the pendency of this suit in which the defendants have both filed processes, one question that did not cease to resonate in my thoughts is why this “desperate haste” to prefer the criminal indictments in exhibit “B” the investigation of which is at the heart of this suit and of the parallel suit in exhibit “E”, and which indictments, by law are not time barred as the substantive suit before this court, had by consent of both the Plaintiff’s Counsel and the 1st defendant’s Counsel, been scheduled for 6/7/16 for hearing”.

“It is the event of the steps taken by the defendants in utter defiance of this pending suit, that in my view, unobtrusively betrayed the possible genuineness of the defendants’ intention and of the 2nd defendant’s motives as steps taken which are beyond serving the “public interest” by the commencement of a criminal trial in the FCT High Court in order to subvert the pending suits in the Federal High Court one of which has been fixed for 6/7/16”.

“By the extant Supreme Court’s decisions, once a court comes to the decision that a particular process before it constitutes abuse of judicial or legal process, the appropriate orders it can make, is to put an end to the continuation of such proceeding”.

“Do I proceed and make such order? I probably would have done so if the criminal charge dated 10/6/16 was pending before this court”.

“But as it is, it is pending before my learned brother, the Hon. Justice Yusuf Halilu of the FCT High court, which is a court of co-ordinate jurisdiction and who has become seised of the charge as at 21/6/16 when he adjourned it to 27/6/16 for the arraignment of the defendants listed in Exhibit “B” attached to the Plaintiff’s “Motion Ex parte”.