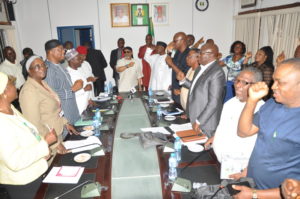 The Federal Government yesterday made a head way in the resolution of pending disagreements in the Oil and Gas sector with an agreement reached with some oil majors to recall sacked workers as requested by the sector’s labour unions.
The Honourable Minister of Labour and Employment, Sen. Chris Nwabueze Ngige at the reconvened meeting with Petroleum Natural Gas Senior Staff Association  (PENGASSAN), Nigeria Union of Petroleum and Natural Gas Workers (NUPENG) and the representatives of some oil companies warned indigenous and international oil companies that Nigeria would not tolerate indiscriminate retrenchment of workers, notwithstanding the economic downturn, saying that one of the cardinal objectives of the present administration is to create jobs.
“The Federal Government is irrevocably committed to job creation notwithstanding the present economic downturn. Our expectation is that where jobs cannot be created, we should at least retain the existing ones. The oil majors, international and indigenous, should resist the disproportionate reduction of their corporate social responsibilities to their workers in reaction to low returns, they should be engaged. Let’s slice the allowances especially at the top and retain the jobs,” Sen. Ngige enthused.
It will be recalled that the Management of Universal Energy Ltd was alleged to have sacked 20 out of the 22 NUPENG members in their company in preference for contract workers in contravention of redundancy clause of the labour laws. The Unions also accused another company, FUGRO Nig. Ltd of sacking its members and coercing them to sign severance letters and unilaterally terminating 25 out of which 6 are executive members of PENGASSA and NUPENG. It also claimed that Halliburton threatened to reduce its workforce.
According the Minister, “after a long deliberation, we resolved all the contentious issues. FUGRO Nigeria limited has to revert to statusquo and open up discussions on the redundancy situation with the union. They have a time limit of 2 weeks to report back to the ministry.”
“Universal Energy also has to revert to status quo meaning that the retrenched staff members have to return to work. They are expected to open up a fresh redundancy talks to be monitored by the South-south Zone of the Ministry of labour in Uyo and give us a feedback within 2 weeks,” the meeting also resolved.
The Minister commended PENGASSAN for its cooperation towards finding a permanent solution to the disputes in the sector.
“We thank PENGASSAN for being very understanding. After our last meeting, they called off their strike and their workers are all back to work. We are here today to resolve outstanding issues. It behooves on all of us in this negotiation to still show good faith so that we can make progress. We will all have to negotiate in the spirit of social dialogue as recommended by International Labour Organisation (ILO), meaning that we make room for give and take by both employers and employees.”
Samuel Olowookere,
Deputy Director (Press)