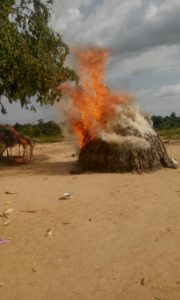 In continuation with the clearance of all suspected livestock rustlers and armed bandits camps and hideouts in the country especially in the north west geo-political region of the country, troops of 223 Battalion, 1 Brigade of 1 Division, Nigerian Army, have been carrying out raids and clearance operations with tremendous success.

The troops recovered 1 Dane gun, 2 Locally made pistols and 4 Motorcycles. In line with established procedure, the camps were destroyed.

Similarly, the troops also went on a long-range patrol along Dumburum-Batsari forest axis in Zurmi LGA of Zamfara State, as well as part of Katsina State.

They also discovered several cattle rustlers and armed bandits’ camps and destroyed them after an encounter with the bandits in the area. Here too, the troops killed a bandit, while others fled on motorcycles and recovered 3 Locally made pistols.

Thereafter, the patrol team proceeded to Batsari in Katsina State and linked up with troops of 35 Battalion of 3 Brigade Nigerian Army and cleared several bandits camps within the area. The troops in conjunction with Nigeria Police also recovered a stolen Mercedes Benz car model E200 with registration number Lagos CW 504 LND from one Gambo Ibrahim of Kubacha town, that was stolen at New Karu.

You are please requested to disseminate this information to the public through your esteemed medium.

PRNigeria encourages institutions to be transparent in their information management as it provides news items from authoritative sources for free use by the media
More Press Releases on www.prnigeria.com