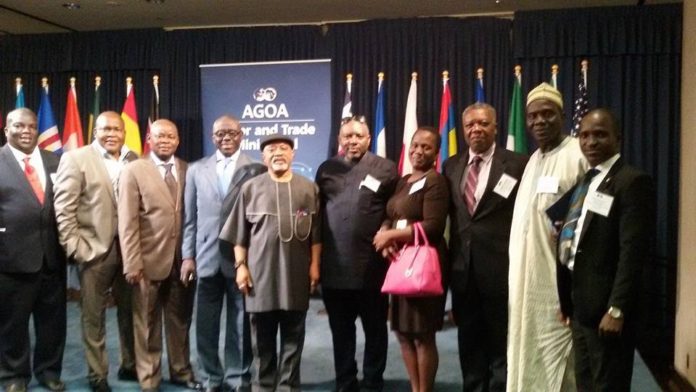 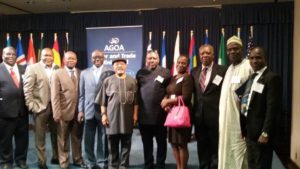 Nigeria has called on the United States to assist in establishing an Africa Skills Development Fund to facilitate the training of skilled manpower from the army of unemployed African youth population.
Speaking on Day Two of the Labour and Trade Ministerial Roundtable of the Africa Growth and Opportunity Act (AGOA) at the Department of labour Building, Washington D.C, United States, the leader of the Nigerian joint Labour and Trade delegation to the Forum and the Minister of Labour and Employment, Sen. Chris Ngige underscored the importance of such a fund in tackling unemployment and stemming the tide of poverty factors that hinder fair labour practices on the continent.
“Child labour, human trafficking, cheap and slave labour are all products of base factor of poverty which a diverse skills development and empowerment can help tackle. A skilled youth population will make for an all-inclusive social protection for the group as well as being fundamental in tackling poverty in Africa. This will also snowball into entrepreneurship,” the Minister said.
According to him, “core to the cardinal vision of President Buhari administration in Nigeria is decent job creation, proper engagement of the Nigerian youths through different skills acquisition, training and the provision of critical infrastructures that promote self-reliance as key to worker rights.” He said government’s effort is hinged on the united Nation’s Sustainable Development Goals (SDG) and the Africa Union Plan of Action on Employment and Poverty Alleviation, citing the rejuvenated activities of the National Directorate of Employment (NDE) and the Small and Medium Enterprises Development Agency (SMEDAN) as clear efforts to shut down poverty gap.
Sen. Ngige described as erroneous the impression in some international quarters that Nigerian government through their laws is labour-restrictive. He drew attention to the deep constitutional provisions, especially section 40 of the Nigerian constitution on freedom to association and unionize labour friendly inclinations of successive Nigerian governments, which has been deepened under the present government and insisted that democratic tenets have rather guided every decisions on labour. Said he, “labour unions in the country freely elect their leaders without any form of interference from the government.” However, government as a responsible institution only recognizes the labour leadership which emerges from the popular wishes of the majority and not the other way round.” He also emphasized government’s positive responsiveness to social dialogue and tripartite engagement, involving the employers and workers in the settlement of industrial disagreements, while underlining the rights of all parties to justice through the National Arbitration Panel up to the National Industrial Court as the peak.
Dwelling further on Federal Government’s efforts to decent work and fair labour practices, the Minister pointed at the renewed efforts of the National Agency for the Prohibition of Trafficking in Persons (NAPTIP) to effectively tackle human trafficking and the current re-jigging of the primary education curriculum, with national school feeding program as key to the effort of the Buhari administration to tackle child labour and trafficking at the roots.  He also listed the nomadic and the Almajiri School programme of successive Nigerian administrations as part of national efforts towards tackling the malaise. He regretted that the insurgency in the northeast part of the country with the displacement of millions from their homes has been a big challenge to the government tackling of child labour and trafficking.
Contributing to the panel discussion on “Integrating Labour and Trade Policies Under AGOA” Sen. Ngige said the nation’s occupational safety monitoring and standard were weak and appealed for support in equipping and the training of inspectors in this special area that requires competent professionals from various fields like medical doctors specializing in occupational health, engineers of various disciplines, biochemists, occupational safety professionals that special technical assistance. He added that sub-regional integration of occupational safety practices is necessary to assist peer review among sister nations.
He linked the militating factors of Nigeria’s development to corruption, hence, the zero tolerance of the present administration and its iron cast resolve to stamp it out. He said Nigeria needed the full cooperation of the international community, especially the United States in tracking and returning the stolen funds.”
Earlier, the moderating United States under Secretary for International Labour Affairs, Eric Biel called for integrated labour and trade policies, arguing that regional cooperation on labour and trade matters as well as incorporation of rights are critical elements of AGOA utilization strategy. He urged the participating ministers to identify and discuss country-specific goals, outcomes and challenges to form the substance of 2017 AGOA Forum.
Samuel Olowookere
Deputy Director (Press) 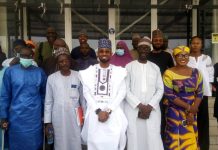