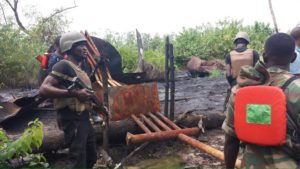 Operatives of the Nigerian Navy Ship (NNS) DELTA have arrested suspected illegal oil bunkerers at Epomu creek with a Cotonou boat carrying unspecified amount of product suspected to be crude oil. This is even as another 3 persons were arrested for suspected illegal oil bunkering. The suspects were caught with a 200HP speed boat carrying the sum of two million, six hundred and twenty two thousand, four hundred and fifty naira only (N2,622,450.00). The suspects and cash have been handed over to officials of NSCDC for further action.
Additionally, a patrol team deployed by NNS JUBILEE has arrested 3 suspected oil thieves around Prime Energy in Akwa Ibom state. The suspects were conveying 10 drums of allegedly stolen Premium Motor Spirits (PMS) and 5 drums of suspected illegally refined Automotive Gas Oil (AGO) in 3 speed boats. Furthermore, NNS PATHFINDER patrol team raided an illegal refinery site around Isaka community in Rivers state. During the raid, the team destroyed the illegal refinery together with a Cotonou boat laden with suspected stolen crude oil and a ground reservoir with unquantifiable quantity of suspected illegally refined AGO.
In a similar development, FOB ESCRAVOS under the maritime component of OPS DELTA SAFE on 26 Sep 16 discovered a haven for illegal refining of stolen crude oil at Saghara creek in Warri South West LGA of Delta state. The site had storage pits with large volumes of suspected stolen crude oil as well as large volumes of illegally refined product suspected to be AGO. Though no arrest was made, the patrol team in conjunction with troops of the land components of OPS DELTA SAFE destroyed the site.
You are please requested to disseminate this information for the awareness of all.
CHRISTIAN ODOGWU EZEKOBE
Commodore
Director of Information