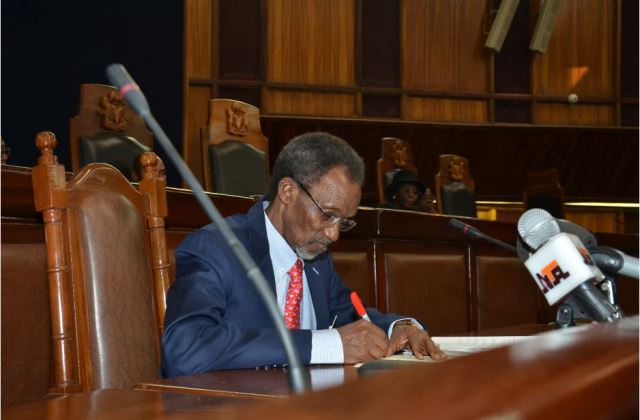 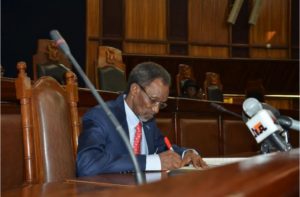 The Chief Justice of Nigeria (CJN), Justice Mahmud Mohammed has appealed to Nigerians to be calm over last weekend’s unprecedented arrest of two of his colleagues at the Supreme Court and other judges of lower cadre.

The CJN who broke his silence on this issue in Abuja on the occasion of the valedictory session held in honour of a retired Supreme Court Justice, Justice Suleiman Galadima, said he was saddened by the event.

“My lords, invited guests, ladies and gentlemen, not to detract from this occasion, it is indeed very saddened and deeply regrettable, the distressing and unfortunate incident which occurred on Friday 7 October and Saturday 8 October 2016”.

“However, I must appeal to all Nigerians to remain calm and prayerful, as an emergency meeting of the National Judicial Council (NJC) will take place tomorrow ‎to comprehensively look into the matter”.

“I must express my sincere appreciation to the executive of the Nigerian Bar Association (NBA) ably led by the president, Abubakar Mahmoud, SAN and indeed all members of the legal professions, for their ‎prompt action and continued support.”

Although it is traditional for the Attorney General of the Federation (AGF) to attend such valedictory session, the incumbent AGF, Abubakar Malami, SAN, was conspicuously absent. Neither did he send a representative.

Speaking at the event, NBA President insisted that President Muhammadu Buhari should call the security agencies responsible for the arrest of the judges to order.

“These military style operations are totally unacceptable in a democratic society. They are unacceptable against private citizens but even more against serving justices of superior courts”.

Mahmoud said the NBA rejects the explanations and justification by the presidency that these so called surgical operations were targeted at corruption and not the judiciary.

“We find it absurd that the presidency will accept assurances from DSS that it followed due process of the law”.

“We maintain our position that these operations are illegal and unconstitutional. I want to reiterate that the position of the NBA is not aimed at protecting any judge. We are not also shielding any judges from investigation from charges of corruption”.

He also addressed the divisions among lawyers over the arrests and raids of the judges’ houses in the middle of the night by masked armed men.

“We do not accept it. This portends real danger to the Nigerian democracy. It is contrary to all civilised norms and accepted standards”.

He called on DSS to restrict itself to its constitutional and statutory duties as according to him, DSS core mandate is to guaranteeing internal national security.

He called on the CJN to immediately take necessary and urgent steps to set in motion the process of cleansing the system.

He said: “Urgent steps to restore confidence of the Nigerian people in the nation’s judiciary”.

He called on lawyers to remain resolute and speak with one voice, adding, “this is not the time to be divided”.