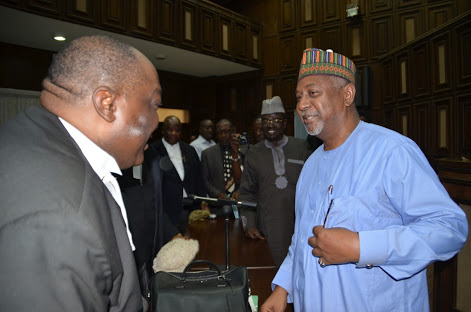 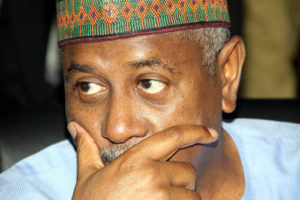 Mr. Ademola was among Judges arrested by the Department of State Service (DSS) over corruption allegation.

After his release by DSS, Justice Ademola wrote the Chief Justice of Nigeria, saying he was attacked unjustly and cited his previous rulings on Mr. Dasuki during which he granted him bail. The SSS did not obey the order.

Speaking in court today, he said: “I am sure you are conversant with what is going on the last seven days. One of the allegations being made against me is that I received some money from Sambo Dasuki. This is the allegation of the SSS.

“I thought I should tell the counsel what is being said.”

“Before I announce my decision, let me ask the defendant (Sambo Dasuki) some questions,” Mr. Ademola said.

‎He then began a series of questions and answers between himself and Dasuki inside the court.

Ademola: Do you know me at all?

Dasuki: Before I came to this court, not at all.

Ademola: Did you at any time give me money?

Dasuki: Not that I am aware of.

Ademola: Did you send your lawyers to give me money‎?

Dasuki: Not at all.

Ademola: Did you give money to any of my relatives‎?

Dasuki: Not at all, maybe the SSS alleging that did,” Mr. Dasuki said.

All the counsels for the two parties agreed with the decision of Justice Ademola for fairness and justice in view of the circumstances.

Justice Ademola has had running battle with the DSS over disobedience to court orders by the operatives on several occasions.

On September 1, 2015, Justice Ademola granted bail to Dasuki on self-recognition after following the no-objection by the lead prosecutor, Mohammed Diri who was the Director of Public Prosecution of the Federation (DPPF).

On November 13, 2015, Justice Ademola lambasted the Department of State Security Services (DSS) over their disobedient or court order over the bail granted to Dasuki. He had said: “I stand by my order, nobody is saying that the man should not be investigated, but the order must be obeyed and I am not ready to bend on the order”, fumed Justice Adeniyi Ademola of Federal High Court 6.

Similarly, on April 19, 2016, Justice Ademola refused to grant request by DSS to conduct a secret trial on Dasuki case. Sambo Dasuki had insisted that he wanted his trial in the court to be open and public for the benefit of audience as he had nothing to hide.

Justice Ademola said that there was no point for the witnesses billed to be called to testify in the matter to wear masks and bear pseudo names and addresses so as to facilitate their protection. Justice Adeniyi Ademola held that the federal government had in its charges listed the names and addresses of 11 witnesses to be called to testify against Dasuki and made same available to the general public and as such there was no basis for any hide and seek game in the trial.

Similarly on June 23, 2016, Sambo Dasuki had told the court that he is being punished by some persons at the highest level of power in the country for perceived grievances they hold against him while in active military service many years ago.

Dasuki who did not name any particular person said that the punishment being meted on him was unfortunate having borne out of mere vendetta.

In an emotion laden submissions while reacting to the government request for his secret trial, Dasuki who spoke through his counsel Mr. Joseph Daudu SAN told the court that he has rested his case in God for the ultimate judgment.

“It is crystal clear that the defendant (Dasuki) is being punished by the powers that be for the perceived offences committed long before… we leave them to the Almighty God for his ultimate judgment”.

Dasuki had been arraigned before three different high courts for various allegations and was granted bail but was rearrested in November 2015 by the Federal Government and has since been held incommunicado.

The prosecuting counsel, Chief Dipo Okpeseyi (SAN), on behalf of the government had prayed the court to allow witnesses give evidence behind the screen to be provided by the court. He held that the request hinged on the fact that Dasuki as a former top security chief has large loyalists across the country who may jeopardize the trial if done in the open.

He further submitted that Dasuki has in the recent past held the highest security office in the country and has loyalists in the security circle whose loyalty has been transferred to personality and whose actions might be inimical to prosecution witnesses some of whom are still in the service.

Okpeseyin cited the case of the government witness who was involved in a serious accident, resulting in multiple fractures and injuries but however stated that in as much as he would not allude that Dasuki has a hand in the accident, it heightened the need to have the witnesses protected by the court.