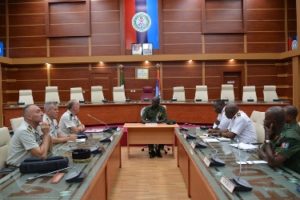 The French General made this known when he visited the Defence Headquarters to discuss modalities for the training and other support of the Nigerian military personnel which he assured could commence as soon as possible.

Brigadier General Facon specifically mentioned training on Force protection, maritime security, Counter Improvised Explosive Device and other relevant areas that would be of immense benefit to the Nigerian Armed Forces.

In his response, the Chief of Defense Staff, General Abayomi Gabriel Olonisakin, represented by the Chief of Policy & Plans Defence Headquarters, Air Vice Marshal Bashir Saidu thanked the French Forces Commander for all the assistance the Nigerian military had enjoyed in the past, assuring him of Nigerian military’s readiness to embrace the opportunity offered by the French counterpart which will go a long way in aiding our operation in the North East against the terrorists.