…As Labour Minister faults report on child soldier, others 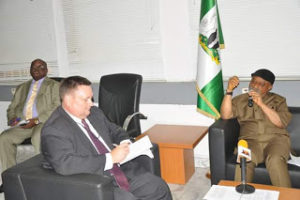 The United States Department of Labour (USDOL) has commended Nigeria for making significant progress in stemming the scourge of Child Labour and Human Trafficking.
The commendation is contained in its 2015 Child Labour Report, which the Representative of the Department of Labour, Marlin Hardinger presented to the Honourable Minster of Labour and Employment, Sen. Chris Ngige today in Abuja.
According to him, the reports reviewed Child Labour developments in 142 countries and found “moderate advancement” in Nigeria’s efforts to tackle child labour.
“Significant update on the report covering 142 countries listed Nigeria as combating child labour and most of the efforts have to do with the good work Nigeria has made on legislations that work against child labour. This report has been applauded by policy makers all over the world,” Hardinger said.
Responding to this declaration, the Honourable Minister of labour and Employment, Sen. Chris Ngige commended the favorable findings on Nigeria but disagreed on the accuracy of some of its conclusions. The Minister emphatically rejected the aspect of the report that blacklisted Nigeria as engaging in “child soldiering,” attributing the incident to the desperate activities of the Boko Haram insurgents who are terrorists and which cannot in any way be linked to the government of Nigeria.
Reacting further to other sectors such as agriculture, gold mining, construction as well as social malaise of begging and scavenging where the reports gave a thumb-down to Nigeria, the Minister re-stated that the involvement of children in these low occupation apart from arising partly from cultural practices is majorly the consequence of poverty and poor education which African countries are grappling with.
He further explained that the issue of artisanal gold mining by children was a cultural practice based on village groups which involved youths and women groupings.
He therefore reiterated the resolution of the African nations at the recent Africa Growth and Opportunity Act Forum in Washington D.C for the United States’ direct funding of education and infrastructural development, especially skill acquisition in African rural communities as a sure way to tackling child labour and trafficking.
The Minister earlier assured the international community that every other aspect of the report where Nigeria is genuinely lagging behind would be swiftly tackled by President Muhammadu Buhari since the causes of such child labour practices were not inseparable from corruption which the administration is determined to stamp out.  He assured that Nigeria would issue a technical report to appropriately respond to all the issues raised by the Department of Labour Reports and put them in the right perspective.
Samuel Olwookere
Deputy Director (Press)