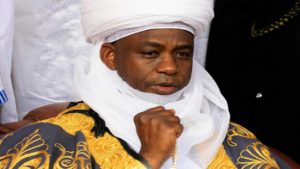 Niger state Governor, Alhaji Abubakar Sani Bello  has applauded the Sultan of Sokoto and President-General of the Nigeria Supreme Council for Islamic Affairs (NSCIA), Alhaji Sa’ad Abubakar III for his significant contributions to the unity, peace, progress and development of the country in his first decade on the throne.
In a congratulatory message to the Northern Nigeria’s most eminent monarch and spiritual leader of the country’s Muslims, Governor Sani Bello described the ten years reign of the Sultan as filled with immeasurable activities, challenges and overwhelming success.
In a statement by his Chief Press Secretary, Malam Jibrin Baba Ndace,  the Governor said the Sultan has been able to bring hope and understanding where despair, desperation and uncertainty had taken hold, citing the many initiatives and efforts made by the monarch to counter  negative perception and reduce influence of ethno-religious influence in Nigeria through various fora including inviting international Joint Muslim-Christian Delegation to Nigeria.
Governor Sani Bello also noted that, as the 20th Sultan of Sokoto, Alhaji Sa’ad Abubakar III was instrumental to the establishment of Nigeria Inter-Religious Council (NIREC) which is championing the course of sustainable peace, security, ethno-religious harmony and peaceful co-existence amongst people of various faith.
“The Sultan’s reign has brought unity and peaceful co-existence and greatly reduced mutual suspicion and tension amongst people from different religious and ethnic divide. He has been able to sustain and enhanced the status of the throne and wielded influence that transcends the country’s borders. These efforts has earned the Sultan  national and international recognition including joint nomination with Cardinal  John Onayekan for Nobel  Peace Prize in recognition of their peace-building roles  ”, the Governor stated.
“We are proud to celebrate a strategic leader and statesman whose positive attitude, strong will, discipline, self-confident and ability  to manage people have been significant factors towards the progress and development of the Sultanate in particular and the country in general. He has clearly  combined his militaryexperience with the Sultanate leadership values in the discharge of his responsibilities ”, he added.
While acknowledging the role of traditional rulers and religious leaders in nation building, Governor Sani Bello stressed the need for government to support them by creating the right platform for them to function effectively.
The Governor prayed Allah to grant the spiritual leader many more decades ahead in good health and wisdom to continue with the remarkable service to humanity by promoting mutual respect and condemning bigotry wherever it rears its head.
Alhaji Sa’ad Abubakar III, was a  serving  Brigadier  General of  the Armoured  Corps, Nigerian Army,  when he was recalled to take office as  the 20th Sultan on November 2, 2006 following the  demise  of his  brother, Muhammadu Maccido who died in the ill-fated ADC Airline in Abuja.
Jibrin Baba Ndace
Chief Press Secretary

Insecurity in South East: Time for Igbo Youths to Team Up with Military to Restore Glory