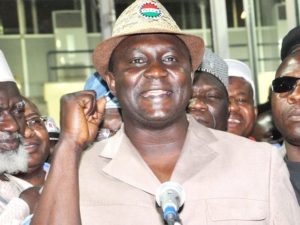 Nigeria Labour Congress lauded Federal Government’s initiative on Saving One Million Lives Performance for Result (SOML P FOR R) in the health sector
The President of Nigeria Labour Congress(NLC),Comrade, Ayuba Wabba, who was represented by Mrs.Maureen Onyia, made the commendation during the operationalization meeting of the Save One Million Lives Programme organized for the Commissioners of Health of Benue, FCT, Kogi, Kwara, Nasarawa,Niger and Plateau States in Abuja.
The President of NLC cautioned State Governments against diverting of the funds for other purpose, he said that NLC would set up a Committee for Monitoring and Evaluation for the SOML P for R Programme.
He further said that it would not be business as usual, because the NLC would keep the State Governments on their toes towards utilization of the Grant.
He pledged the support of the Nigeria Labour Congress for Saving One Million Lives P for R Programme because it was people oriented.
In his address, the Hon. Minister of Health, Prof. Isaac Adewole, said that the essence of the meeting was to foster cooperation between the state and federal governments so that they would be on the same page with the view to chart the way forward.
The Minister said that it was a World Bank loan for Federal Government but a grant to the State adding that there was need for them to use the grant judiciously.
He said “the concept was not new what is entirely new was the fact that the scope has expanded and it has been considered as strategy to deliver health sector‘’
“I hope we can tell the world that we can do it and we can be trusted, improve maternal and child health, child nutrition, treat malaria, particularly  at the primary healthcare level, at the grassroots or local government’’. He stressed.
Adewole further said that what is paramount now is how to move Nigeria forward, eliminate those things that have been eliminated in other part of the world including some African countries.
In his Goodwill message, The World Bank Country Director in Nigeria, Rachid Benmessaoud, represented by Dr. Benjamin Leovinsohn  , said the SOML P for R Programme was result driven and measured.
He noted that the grant would provide economy growth for the states as well as go a long way to make the states to be independent of each other.
Boade Akinola
Director Media and Public Relations
FMOH