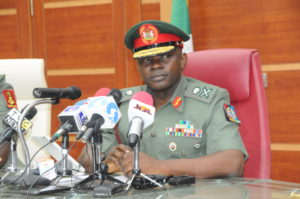 The Defence Headquarters (DHQ) has sought the assistance of the Nigerian Society of Engineers (NSE) in its plan to set up a Research and Development Agency for the Military.

The Chief of Defence Staff (CDS) made this request Wednesday when the leadership of the NSE paid him a courtesy visit at the DHQ, Abuja.

The CDS, an Engineer himself intimated his guests that the Research and Development department of the DHQ is being upgraded to an agency in order to have the capacity to attract proper funding. The bill for the establishment of the agency is already before the National Assembly.

General Olonisakin insisted that until Nigeria become self-reliant in Military technology, it will not be able to do much in warfare.

He said “When you import everything, you are at the mercy of the manufacturers of the platforms. We must encourage our engineers to be innovative in the areas of ingenious technology. This will make the nation to develop.”

Earlier, President of the NSE, Engr. Otis Anyaeji who was elated that an Engineer was found worthy of the position of the CDS congratulated him and prayed that God will grant him the wisdom, strength and health to carry out the task of looking after the entire Nigeria Defence system.

Anyaeji while urging the CDS to create areas of interaction for the progress of Defence related engineering also disclosed that there are Military engineers who are yet to register with the NSE and therefore handed over registrations forms to the CDS to that effect.

The NSE president also used the occasion to invite General Olonisakin to grace the opening ceremony of its upcoming annual convention in Uyo, Akwa-Ibom State on November 22. The CDS promised to be represented at the occasion. The NSE also commended the feat the Armed Forces had achieved recently in areas of defence engineering leading to the use of drones and local manufacturing of aircraft spare parts.