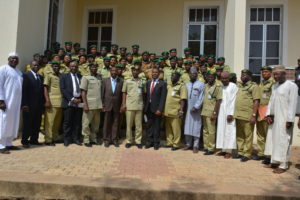 …. Inmates obtain distinctions in NCommon Entrance Examinations
The Controller General of the Nigerian Prisons Service, Ja’afaru Ahmed has charged information officers of the Service to pay greater attention to the exploits of inmates in education, sports and other fields of human endeavour.
He cited example of a best graduating students in National Open University of Nigeria (NOUN) and many inmates that obtained outstanding distinctions in National Common Entrance Examinations of WAEC and NECO.
According to him, the prisons service has a lot to contribute to nation-building, saying inmates who pass through the prisons walls could prove to be worthy tools in re-engineering the economy.
Ahmed spoke Wednesday in Abuja while declaring open a two-day workshop for Command Public Relations Officers of the service drawn from across the federation and organised in collaboration with the Centre for Crisis Communication (CCC).
“As it’s typical of prisons everywhere in the world, those in incarceration usually exhibit a common trait which is devising means to secure freedom either using the approved means or through unacceptable process like escape. Employing the latter has often been a source of friction between authorities and the captive population. Therefore as a prisons officer, beyond understanding the dynamics of providing custodial services for prisoners, it is also important to appreciate communication process with the public using the media in order to guide against skewed and negative narratives.
“Recent developments have made it more imperative for you as field officers to sharpen your skills to ensure that you carry out this onerous task with utmost professionalism balancing respect to stakeholders and the protection of the Service’s integrity.
“Developmental strides that have been recorded in the areas of inmates training in sundry vocations, successes in external examinations, after-care scheme etc are all laudable care and support given to prisoners that deserve good mention in the media and it is your duty to let the public know”, he said.
Earlier in his welcome remarks, the Executive Secretary of the Centre for Crisis Communication, organizers of the workshop, Air Commodore Yusuf Anas (retd) said the workshop became imperative in order to develop the capacity of key officers of the prisons service in handling sensitive national information.
The occasion also witnessed the presentation of awards of excellence to best performing Public Relations Officers and commands of the Nigerian Prisons Service. The awards recipents are from Lagos, Yobe and Abuja Headquarters of the service
By PRNigeria