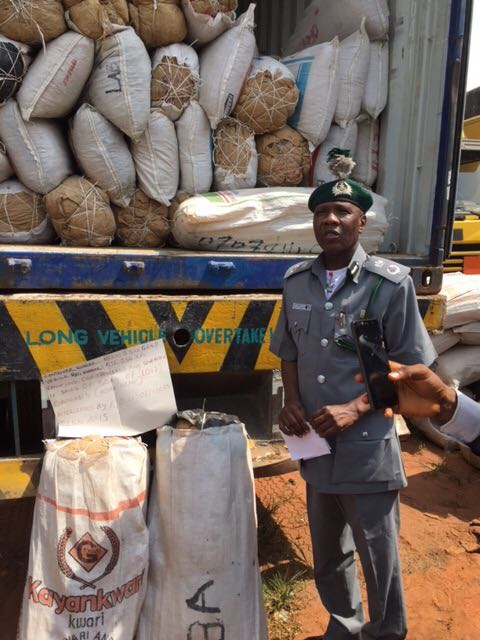 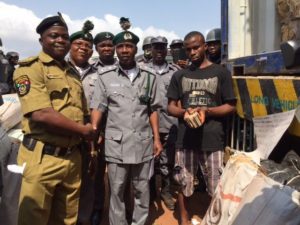 The Nigeria Customs Service, Federal Operations Unit Zone C Owerri has interecepted trucks loaded with smuggled foreign rice, adulterated petroleum products, cannabis among other prohibited items.Confirming the development at a media briefing, the Customs Area Controller, Mohammed Uba Garba said a trailer truck with registration number GBB 85 XA suspected to be carrying adulterated diesel petroleum product was intercepted by the Nigeria Customs along Aba-Owerri road. He said: “The exhibit was discovered to have been hidden in a specially constructed tank for illegal bunkering and also concealed with 256 sacks of expired animal feeds to evade arrest.“The seized adulterated petroleum product causes blockages of heavy duty machines and generators, which equally emit hazardous carbon monoxide, that are detrimental to the health.”Comptroller Mohammed said that a suspect who gave his name as Chibuzor Njoku was arrested in connection with the crime and would be handed over to the Nigeria Security and Civil defense corps for prosecution. Comptroller Mohammed also disclosed that a 1 X 40” container with marks numbers MRKU 254564 loaded with 1,017 sacks of 50kg cannabis (Indian hemp) estimated at over #16,000,000 was intercepted on the Benin-Shagamu road. According to him, the only suspect – James idoko who claimed to be a student upon interrogation attempted to deceive the Customs men by fraudulently presenting copies of suspected fake customs processed document on importation which was contrary to what was contained in the container. The controller added that “the suspect offered a bribe of #350,000.00 in an attempt to avoid arrest. He is currently in custody with the bribe money which now serves as an exhibit along with the container load of cannabis awaiting the estimated value from the relevant agency – NDLEA.”“The increasing tempo of criminality, violence and juvenile delinquency among the youth is traceable to the rampant consumption of hard drugs such as marijuana hence the clamp down on those involved in the illicit business. “Consumption of cannabis also affects family relationship and we must fight it to the last so as to have a better society,” he stated. The Customs Controller who subsequently handed over the seized items and the suspect to the Principal Staff Officer (Operation and Intelligence) of the NDLEA Edo State Command Timothy Adewole for further investigation assured that the NCS would continue to collaborate and work in synergy with sister organizations such as NDLEA, NSCDC, NAFDAC to smoothen its operations. Furthermore, Comptroller Mohammed said that a MAN diesel truck with registration number KRV 238 XB carrying 725 different brand of 50 kg foreign rice with Duty Paid Value of #24,650,000. 00 suspected to have been smuggled into the country through the numerous creeks in Calabar/Cameroun border was similarly intercepted by his men this month. He said that a suspect who gave his name as Mr. Fredrick Eze and claimed to be a representative of the owners of the exhibit was arrested. The Customs Area Controller regretted that the penchant for foreign products by some Nigerians has continued to deal a devastating blow to the nation and her economy while many families have been thrown into agony as a result of the ceaseless unpatriotic activities of smugglers. He noted that while the nation has continued to lose huge revenue, many lives have been lost consequent upon the unabated practice of smuggling. He therefore advised Nigerians to imbibe a greater sense of patriotism in line with “the change begins with me” mantra recently launched by Mr. President by eschewing all acts and conducts inimical to the nation. Ifeoma OnuigboPublic Relations OfficerFederal Operations UnitZone C,  Owerri