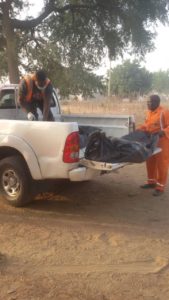 Emergency workers have confirmed the death of Professor Aliyu Mani of Faculty of Veterinary after a Bomb-Blast at a mosque in the university of Maiduguri.

Professor Mani was one of the victims of twin-suicide bombing in the University of Maiduguri, Borno State.

PRNigeria gathered that the incident occured in a mosque near Gate 1, not the main Central Mosque, while the other explosion occured around Gate 5 of the same university.

The incident occurred during early morning Islamic Prayers, Subhi around 5am.

Rescue and security officials have cordoned the areas while triage and casualty evacuation have been concluded.

Official from National Emergency Management Agency (NEMA) and that of Borno State (BOSEMA) confirmed the evacuation of bodies of the Professor, a child and two bombers.

While doctors confirmed the dead of four people including the two bombers, 17 other victims who sustained injuries are being treated by medical personnel.

Meanwhile PRNigeria gathered that Professor Aliyu Usman Mani was born in Katsina town on Thursday 11 April, 1957. He attended Kayalwa Primary School, Katsina (1964-1970), and proceeded to Government College Kaduna (1971-1975) from there he went to School of Basic Studies (SBS) ABU Zaria (1975-1976).

After passing he got admission into the faculty of veterinary medicine ABU, zaria and graduated with the award of Doctor of Veterinary Medicine DVM in 1981. He did his NYSC with school of Agriculture in Asaba, Bendel state.

He worked briefly with Niger Basin Development Authority in Ilorin Kwara state before he proceeded to University of Maiduguri as an Assistant Lecturer Department of Veterinary Medicine in October, 1982. Later he attended the Center for Tropical Veterinary studies Edinburgh UK (1984-1985) where he got his Masters and PhD.

He held several positions in committees both within and outside the University. He also held a number of positions in the Nigerian Veterinary Medical Association (NVMA).