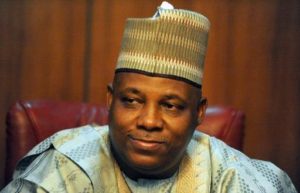 The Federal Government in fulfillment of her promises to the people of North East Geo-political zone, through the Federal Ministry of Health has flagged-off the Health and Nutrition Emergency Response Initiative with the presentation of essential medicals and supplies including vehicles valued at N 4.334 billion to the Governor of Borno State, Hon. Kashim Shettima.
The handing over ceremony which coincided with the graduation of 325 volunteered Health workers that were trained by the Federal Ministry of Health for deployment to the 25 LGA’S that were seriously affected by the activities of the Insurgents.
Speaking at the ceremony, the Honourable Minister of Health, Prof. Isaac Folorunso Adewole praised the initiative of President Muhammadu Buhari for providing qualitative leadership and taken ownership of providing adequate health care services for the citizens with the support of the development partners. He said gone are the days when development partners were on the driving seat of providing care for the citizenry.
Prof. Adewole also called on the officials of Barno State Ministry of Health and the volunteers to ensure judicious use of the items provided, for the use of the people free of charge and that the items should not be sold or found in the market. He said anyone caught in untoward activities with the items shall face the wrath of the law.
Responding, the elated Governor of Barno State thanked the Federal Government for working her talk and promised to put in place a transparent and accountability structure that will ensure that the items are solely used for the people.
The Governor equally seize the opportunity to thank the Nigeria Armed Forces for restoring peace in Barno State, he said the accidental bombing by the NAF was an act of God which Barno people had put behind them.
He also appreciated the volunteers for their patriotism; he assured them of absolute security while in the State.
Later in the day, the Honourable Minister visited the State drugs store under construction, Bonishek IDP camp, the Green House project of the State Government and resettlement Houses build in all the LGA’S for displaced returnees.
The Hon. Minister said “Keeping with the tempo of the ongoing rehabilitation, reconstruction and resettlement that is ongoing in Borno State, in less than five years, Barno State will be an envy of other States in the country” he concluded.
Mr. Olajide Oshundun
AD, Media and PR.