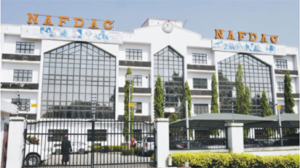 The Honorable Minister of Health, Prof Isaac Adewole, today commissioned the National Agency for Food and Drugs Control [NAFDAC]’s South-South Zonal Office, located in Port Harcourt, Rivers State.
Speaking at the premises of the facility, Professor Adewole said the occasion was symbolic as it was a promise fulfilled by the APC administration which promised Nigerians all abandoned and viable projects would be completed.
The Minister who celebrated the Agency for completing the office complex also reminded them that they have a great responsibility for protecting the health of Nigerians by getting rid of fake and unwholesome products from our country.
He said the task must be addressed headlong as the challenge of fake medicines was moving to another terrain which may have serious consequences for the health of Nigerians.
According to him, s this is because some of the fake drugs were being fed to animals which are in the end consumed by humans and this is already resulting in the upsurge of anti-microbial resistance{AMR} which is becoming a major global health challenge.
Prof. Adewole who said the task was daunting and would require the collaboration of all stakeholders, therefore called on the Rivers State Government and relevant law enforcement agencies to partner with NAFDAC in ensuring that fake and unwholesome products be intercepted and prevented from getting to the end users as we join hands to protect the health of Nigerians.
In her welcome address, the Ag. Director General of NAFDAC, Mrs Yetunde Oni, said the completion of the building would help address the ever-increasing volume of regulatory activities in the South-South Geopolitical Zone especially with the presence of an International Airport and Sea Ports in the region.
‘The completion of tis building is an attestation to the commitment of NAFDAC to promote a well-motivated and disciplined work force for improved service delivery. In 2015, we completed the construction of a six-story office complex in Isolo, Lagos, which has remarkably enhanced our operations in Lagos and its environs’, she said.
Also speaking at the event, the Chairman, House Committee on Health Care Services, Hon Chike Okafor, pledged the support of the House of Representatives in the fifth against fake and sub-standard drugs.
The Rivers State Hon Commissioner for Health, Dr.  Theophilus Agama said the state would raise the bar on collaboration with NAFDAC
He noted that the State has a lot of substance abuse issues and that working together with NAFDAC would help stem the tide of mortality and morbidity arising from the use of fake and unwholesome products.
Boade Akinola [Mrs]
Director [Media and Public Relations]
Federal Ministry of Health.