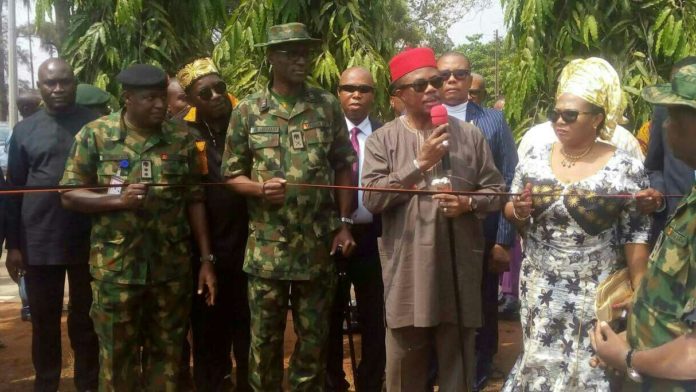 The commissioning of the military police duty room is significant in many ways; it serves as a reporting centre for human rights violations by the cantonment’s community and members of the public, lost of goods and other valuables. Above all, it is a centre for discipline, punishment and detention for military personnel in the cantonment who might fall foul of military/civil law.

On his part, Mr Willie Obiano, the Governor Anambra State commissioned a Mortuary at the Onitsha Cantonment’s Military Reception Station, a Palm garden and a Lawn Tennis Court at the premises of the Officers’ Mess.

In his address at the occasion, the Commander 302 Artillery General Support Regiment who is also the Cantonment Commander, Colonel Isah Mahdi Abdullahi, thanked the Chief of Army Staff, Lieutenant General Tukur Yusufu Buratai and the GOC 82 Division for their moral and financial support that aided him to execute these laudable projects for the benefits of the officers, soldiers and their families, as well as humanity. He also expressed gratitude to the Anambra State Governor Mr Willie Obiano for his support to the regiment.

In his remarks, the Governor Anambra State, thanked the President, Commander-in-Chief of the Armed Forces, Muhammadu Buhari and the Nigerian Army for the provision of security and an enabling environment for economic, social and other lawful activities to take place in Anambra State. He commended the NA for the remarkable achievements of Exercise PYTHON DANCE, which ensured a hitch-free yuletide period last year.

The event was attended by many important dignitaries including government functionaries, community leaders, serving and retired military officers and their families.