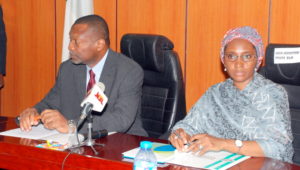 he Federal government has pledged its commitment towards implementing the 71 point National Economic Council (NEC) Retreat Resolutions aimed at improving socio-economic and political development in the country.

The Minister of State Budget and National Planning, Mrs Zainab Ahmed made this known at a two- day workshop for Commissioners of Economic Planning and Budget on the Implementation of the 71- Point National Economic Council Retreat Resolutions in Abuja.

Mrs Ahmed said that government plans to use Monitoring and Evaluation (M& E) mechanism to achieve effective implementation of the Resolutions, and stated that M& E is critical component of the National Economic Recovery Plan. She also disclosed that the existing national M&E framework is currently being revised and strengthened to serve the country better.

She called for close collaboration not just for the federal government and the states in terms of economic plans and programmes, but also among states, citing the partnership between Kebbi and Lagos in rice production which she described as commendable.

In her welcome address, the permanent secretary, represented by Director, macro analysis, Mr Tunde Lawal, reminded the Commissioners that the Nigerian economy is in their hands. She urged the participants to make good use of the opportunity to ensure that they take good decisions that will bring the economy out of recession

Speaking earlier at the event, the Executive Director of the Nigerian Governors Forum, Mr. L.O.T Shittu stated that the event marks a significant milestone in the economic planning process of the country, as well as stating that it provides appropriate platform to review key policy actions undertaken by the States and the Federal government; and the extent to which their machineries have been deployed towards achieving the resolution of NEC.

He disclosed that the Nigeria Governors’ Forum Secretariat is making inroads in a number of important areas, including supporting internally generated revenue reform programmes and fiscal sustainability initiatives, as well as public health and agriculture targets.

He also added that the Secretariat is currently conducting a state- by- state fiscal situation analysis to help the Secretariat create targeted support mechanisms and also influence interventions to address some of the inherent challenges, especially in public financial management.