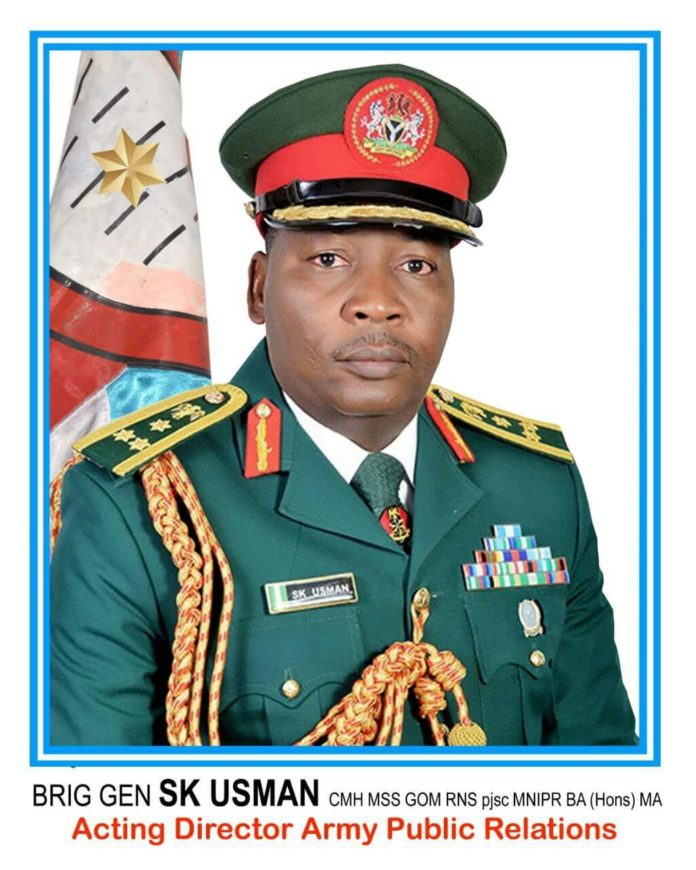 The attention of the Nigerian Army has been drawn to a campaign of calumny on social media platforms by some individuals or group of persons.
The faceless persons have been making spurious and unfounded allegations bordering on payment of troops operations allowances, rotation in the North East and comparing troops’ pay to what obtains in neighbouring countries.

The fabricators are most probably being sponsored by the categories of people that frustrated themselves out of the Army and political self-defeatists.

They are clearly sentimental and lack knowledge of the Nigerian Army of today.

However, investigation is ongoing to determine the full identity and source of this mischief and all those found connected with it will be dealt with in accordance with the extant provisions of the military justice system.

We wish to reiterate that the Nigerian Army is a voluntary Service.

We are not running a conscript Army, all those not satisfied are at liberty to apply for voluntary retirement or discharge as the case may be.

We cannot afford to have disloyal or disgruntled elements in the system.

Anybody caught to be involved in this ignominious campaign would have himself or herself to blame.

The Nigerian Army of today cannot be compared with that of any other period. So much has been done in the areas of operations, training, general administration, logistics and general welfare of troops and their families.

The families of our fallen colleagues are being given adequate attention commensurate with the established terms and conditions of service.

Additionally, the concern on troops welfare has been extended to their families through the creation of the Barracks Investment Initiative Programme (BIIP) in which officers and soldiers families and dependents actively participate.

The Nigerian Army has an elaborate exit plan for all officers and soldiers involved in the fight against Boko Haram terrorists in the North East this year, subject to operational exigencies.

That is why all efforts must be geared towards mopping up the remnants of the desperate terrorists still bent on causing mayhem wherever they can.

Any soldier who is not satisfied with the professional drive of the Nigerian Army and that of the government can do himself a world of good by voluntarily discharging from the Nigerian Army.

Otherwise all must desist from rumour mongering and outright falsehood which are unprofessional and have no place in today’s Nigerian Army.

Fifth columnists will not succeed in their mischief as they will be fished out and dealt with.