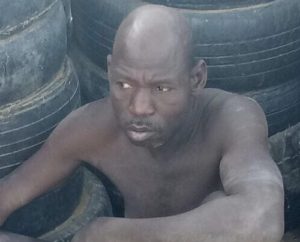 Troops of the Nigerian Army on Operation LAFIYA DOLE have continued with clearance operations on suspected Boko Haram terrorists locations through patrols, ambushes and raids with appreciable progress in their respective areas of responsibility. These efforts have led to arrest,  interception and neutralizing of quite a number of Boko Haram terrorists, as well as recovery of arms, ammunition and equipment. The essence is to ensure security in the areas and prevent infiltration by Boko Haram terrorists among the communities.

It is as regards to this that troops of 159 Task Force Battalion arrested a suspected Boko Haram terrorist, one Mallam Makinta Ibrahim aged 45 years at Bayemari yesterday.

The suspect who hailed from Yaro Grematalti Yunusari Local Government Area. He was also confirmed to be be Premium Motor Spirit and other logistic items to the terrorists.
The troops also arrested another suspected Boko Haram terrorist whose name, age and origin could not be ascertained for now as he pretend to be deaf and dumb. However, he was found to be in possession of 8 functioning mobile telephone handsets, bunch of keys, 2 passport photographs, 2 amulet charms and a transistor radio. Both of the suspect are being further investigated.
You are please requested to disseminate this information to the public through your medium.