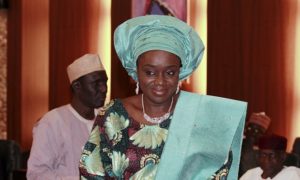 The Minister of Finance, Mrs Kemi Adeosun,  held her first-ever Facebook Live session on Tuesday, April 4, 2017. The 23-minute event, filmed at the Ministry of Finance headquarters in Abuja, and broadcast live through her Facebook page, reached an audience of more than 130,000 persons within the first hour.
The Minister kicked off the Facebook Live interaction with an overview on developments in the Nigerian economy over the past few months, highlighting the Finance Ministry’s work in supporting SMEs, creating jobs, improving transparency, cutting the cost of governance, and boosting Government revenues.
Acknowledging the challenges the Nigerian economy faced recently due to low oil prices, the Minister said: “the good news is that we are working through the issues one by one, and trying to ensure that as we rebuild the economy, we get away from the boom and bust cycle of the past — we want to build an economy where, whether oil price is high or low, there’s sustainable growth for Nigeria and for Nigerians.”
The Federal Government, she said, is doing this by investing heavily in infrastructure and working to create an enabling environment for businesses. One evidence of this renewed focus is the fact that the Ministry of Finance has so far released a Trillion Naira for infrastructure projects in the 2016 budget; a level of infrastructure investment unprecedented in Nigeria’s history.
Responding to a Facebook question about the YouWiN! Entrepreneurship program, Mrs Adeosun explained that the Buhari administration has no plans to scrap it. According to her, the Federal Government has reviewed the scheme and repositioned it as YouWiN!Connect, which focuses on continuous enterprise education and skills building. As part of the restructuring, the Minister noted that YouWiN!Connect now publishes weekly editorials in four national newspapers. She added that the principles of YouWiN!Connect would be incorporated into university curricula across Nigeria.
The Minister also revealed that efforts are on-going to improve payroll assurance through continuous audit and migration of Ministries, Departments and Agencies to the IPPIS Platform.
On the Federal Government’s Whistleblowing Policy, the Minister said it was introduced not only to recover stolen funds but to also serve as a deterrent against corrupt practices.
“Just last week, a whistleblower made claims of long-term fraud and funds misappropriation in YouWiN!,” she disclosed, adding that the Government was now investigating those claims with a view to taking appropriate action.
Speaking on the take-off of the newly-licensed Development Bank of Nigeria (DBN), the Minister noted that it was established to provide access to funding, specifically for Small and Medium Enterprises (SMEs).
According to her, even though SMEs account for over 45% of all businesses in Nigeria, less than 10% of them are able to present collateral to access bank loans. “DBN affords young people access to loans for doing business cheaply and conveniently,” she said.
While answering a question on the economic recession, she said: “We got into recession because, for the last 10 years, even when the oil price was extremely high, and we were borrowing, our reserves were decreasing. We didn’t have enough of a productive economy. The only real thing that was happening and creating growth was the oil price, and as soon as the oil price went down, growth disappeared. What we are trying to do now is to reset the economy, so that we are not so dependent on oil.”
The session ended with Mrs Adeosun expressing appreciation to viewers and participants, assuring them that she would continue to actively engage on social media, through her Facebook and Twitter accounts
Signed
Salisu Na’inna Dambatta
Director (Information)