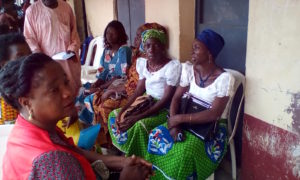 The wife of the president Her Excellency, Mrs. Aisha Buhari says the problem of infant, child and maternal mortality can be reduced, if women begin to pay more attention to their health and that of their children.
Mrs Buhari who was represented by the North central coordinator for Future Assured  Mrs. Hansatu Zannah was speaking at the flag off of the medical outreach organized by her initiative in Makurdi Benue state.
Speaking further The wife of the President said one of the objective of the outreach is to imbibe  the culture of medical checkups, to enable people live longer and healthier lives.
Earlier the Governor of the state Dr Samuel Ortom had pledged his support to all projects of Future Assured that would benefit Benue Indigenes, he said most diseases are commonplace due to ignorance, poverty and undesirable lifestyles whilst The wife of the Governor Mrs Eunice Ortom encouraged citizens in the state to imbibe healthy lifestyles.
About 3,500 people were screened at the outreach for various conditions including, diabetes, hypertension, malaria,  breast and cervical cancer with support services from the Marie Stopes international organization, while Benue state government collaborated In screening for HIV, Hepatitis, tuberculosis and malaria.
Drugs were given out freely to all patients who were diagnosed with any of the above ailments and referrals to all whose cases couldn’t be handled on site were made, as well as family planning done for those who wished
Children were also not left out with 2,521 school children being dewormed and also given free toothbrushes and toothpaste to encourage oral hygiene.
This medical outreach is the ninth so far covered by Future Assured,  Ogun, Oyo, calabar, Nassarawa, Enugu, Katsina, Adamawa, and Kogi have so far benefitted from the initiative
adebisi olumide ajayi
S.A. Medai
wife of the President