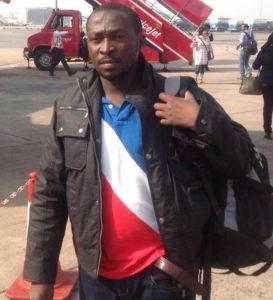 Recent developments in Nigeria have cast the relationship between government and independent journalists as well as public commentators in a disturbing veil of growing anxiety and tension. No fewer than five current governors have thrown journalists and public commentators into detention in the past few months over their comments and reports regarding public policies initiated by these government agencies. Weeks ago, Ahmad Salkida, an independent journalist whose consistency in reporting objectively on the human crisis situation in the Northeast raised the alarm, following a report he published on the released 82 Chibok girls, that his life was under renewed threat.

As a matter of fact the Nigerian Army had in August 14th, 2016 declared Salkida a wanted man without justification. Having willingly submitted himself for interrogation Salkida was released without any charge or indictment by the military authorities.

The same military authorities found nothing professionally unbecoming to use against him, but would not publicly admit this. But the threat to his life, attempts to block him from professionally seeking a livelihood, attempts to profile him and intimidate him continued. The recent attempt has had to involve using an obviously sponsored shadowy group to place, spurious charges in court against him.

We cannot fail to notice and indeed hasten to draw a parallel between Salkida’s present cross and the bullying and the obviously sponsored attempts at intimidation of Amnesty International, Nigeria recently. Following its professional work of calling out government on its deplorable human rights records, the government became so incensed as to suggest that Amnesty International was undermining the Nigerian government’s sovereignty and that the agency was working with the violent terror group, Boko Haram. This was immediately followed by the unleashing hounds on the international agency. The hounds barricaded the office of the agency without causing Police outrage.

Today, similar accusation of working with Boko Haram has been central in the petitions lodged by another shadowy group, the Incorporated Trustees of Overt Legacy and Human Development Initiative, in the court against Salkida.

We fear the eerie connection from the cry of the witch and the death of the baby. We therefore are obliged to call on the Federal Government to swiftly investigate the activities of these neo-NGOs and several individuals online and offline threatening Salkida and parading themselves as defenders of government. We also urged all appropriate security agencies to guarantee the safety of journalists and public commentators all over Nigeria and to particularly guarantee Salkida’s continued professional practice without let or hinder.