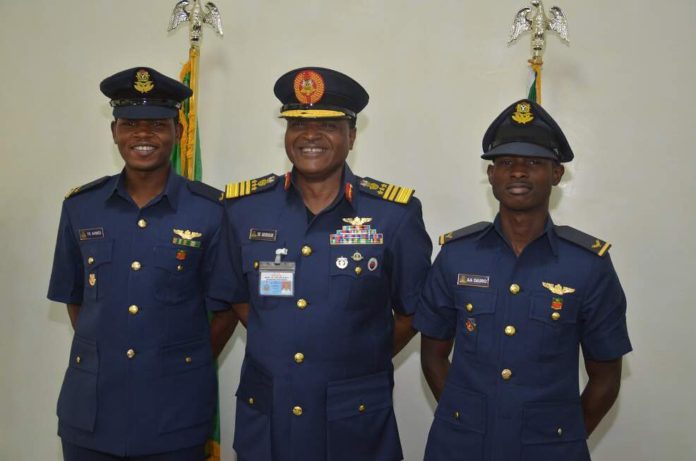 In furtherance of the human capacity building initiative of the present leadership of the Nigerian Air Force (NAF), two combat pilots were ‘winged’ today, 4 July 2017 after successfully completing an 18-month Specialized Undergraduate Pilot Training at Laughlin Air Force Base, Texas in the United States of America.

The two newly ‘winged’ pilots, both of the rank of Flying Officer, went through the primary and fighter jet training during which they amassed over 100 flying hours each on the T-6 Texan ii and T-38 Talon aircraft types.

The 2 officers had earlier undergone an introductory flying training at the US Aviation Academy in Denton, where they flew the Cessna 172 aircraft. They will now be deployed to NAF combat units for tactical training on fighter jets.

In his remarks during the winging ceremony, the Chief of the Air Staff (CAS), Air Marshal Sadique Abubakar reiterated that the NAF would not relent in its efforts at human capacity building, noting that the Service cannot function optimally without appropriate personnel training.

The CAS further stated that the NAF was already reaping from its huge investment in human capacity building, as reflected in the several NAF aircraft that had been successfully reactivated, with attendant effect on operational efficiency.

According to the CAS, “only the right training can enable personnel deal with the complex security challenges facing the country. We will therefore continue to build human capacity while also ensuring that our humanitarian intervention schemes are going on.”

Air Marshal Abubakar congratulated the new pilots and urged them to quickly settle down and join the rest of their colleagues in defending the territorial integrity of the nation. Earlier in his remarks, the Chief of Training and Operations, who represented by the Director of Training (DOT), Air Vice Marshal Muhammed Idris, thanked the CAS for availing the pilots the opportunity to be trained at the prestigious Laughlin Air Force Base, remarking that the training comes with special laurel because of the uniqueness of the school.

It would be recalled that only less than 3 weeks ago, the NAF ‘winged’ 10 officers who had just completed their one-year pilot training program in South Africa. Many more NAF pilots and members of the ground crew were reported to be undergoing training at local and overseas training institutions.