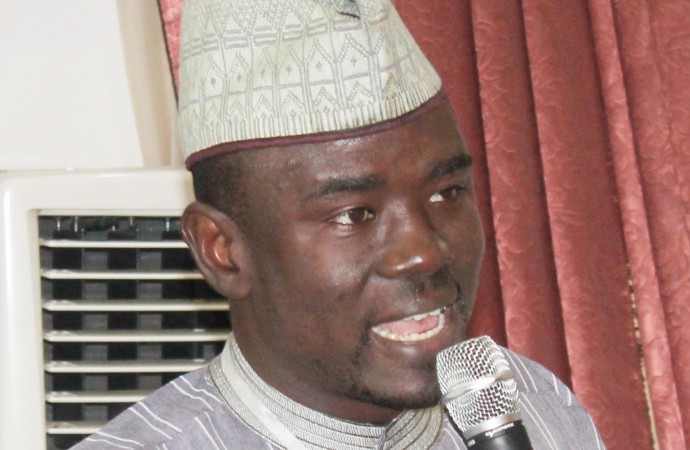 Public Relations Manager, Yushau Shuaib, has opened a can of worms on a former Minister of Finance, Dr. Ngozi Okonjo-Iweala.In his new book, ‘An encounter with the Spymaster’ released to the public in Abuja, Tuesday, Shuaib revealed how he was prematurely retired from the automatic job offered him by federal government for meritorious service .According to the account in the book, Shuaib narrated how the former Minister, who wielded enormous power and influence while in government was alleged to have reported him directly to former President Goodluck Jonathan over an alleged offending newspaper article that criticized the lopsidedness in some appointments made by government in the economic sector.Dr Okonjo-Iweala was said to have been seriously taken offence with the newspaper write-up of the ex NYSC award winner.Following the report to the presidency, former President Jonathan was said to have instantly issued a presidential directive that Shuaib be punished for his audacity in writing the alleged newspaper article.The book focuses partly on the daring efforts of the former National Security Adviser (NSA) Col Sambo Dasuki (Rtd) to give the dreaded Book Haram sect a good fight to cleanse the country of terrorism.He however stepped on the toes of the then Finance Minister in one of the articles.The author writes in the preface: “This Book an Encounter with the Spymaster’ is a collection of my published articles written between March 2013 and June 2017. The period is significant because it commenced with a published Memo to the then Finance Minister, Dr. Ngozi Okonjo-Iweala on lopsided appointments in the Economic sector which prompted my premature retirement from the public service“Series of unfolding events, within the period, mainly influenced the contents of the articles. For instance, after the publication of the Memo, Dr. Okonjo-Iweala reported me to President Goodluck Jonathan over the article. The Presidency, after that, instructed that appropriate measures should be taken against me.“At that period, some great acquaintances including Ijeoma Nwogwugwu, Danladi Kifasi and Ifueko Omoigui-Okauru among others, waded into the matter for an amicable resolution. Even Mallam Garba Shehu and others intimated me of fantastic job offers. Though I politely declined to apologise to Ngozi or accept new jobs, I nevertheless appreciated their concern and efforts.“In compliance with the presidential directive, the Head of the Civil Service of the Federation, Bukar Goni Aji directed the Minister of Information, Labaran Maku to take an immediate action. In his official letter dated April 16, 2013, with a Reference No: HCSF/PSO/AOD/890, Aji wrote: “I write to request that your Ministry commence disciplinary procedure in line with Mr. Presidents’ (sic) directive against Yushau Shuaib currently serving at the National Emergency Management Agency (NEMA).“Meanwhile, the Federal Ministry of Information in a backdated Letter of Recall dated April 11, 2013, with a Reference No FMIC/PIPD/ABJ/D/165 deceptively claimed that “following a reorganization exercise approved by the Minister, you have been recalled to the Headquarters with immediate effect for further posting instructions.“In their desperate attempt to satisfy the Presidency and Dr. Okonjo-Iweala over the said publication, Directors in the Federal Ministry of Information (FMI) met under the Senior Staff Committee (SSE) and recommended the termination of my appointment from the public service after I had responded to their query.

“The Federal Civil Service Commission (FCSC) was alarmed by the recommendation of FMI and insisted that the due process should be followed. In a letter signed by Hon. Commissioner V. A. Olabimtan dated May 21, 2013, with reference No: FC.6318/S.1/69/173, FCSC queried FMI thus: “The query given to Yushau Shuaib was vague, not specific and did not address the issue on the ground properly as the preliminary letter did not mention the name of the top public officer the said article had addressed.“The Commission finds it difficult to entertain the case and to avoid any form of redress in the court, has therefore directed that another query be given to the officer and thereafter avail the commission with its finding as well as officer’s representation.“In a deliberate effort to nail me at all cost, the directors in FMI ignored my various initiatives and efforts in promoting the image of the government while in the service. I had issued countless press releases and articles as well as received awards and commendations even from government agencies in about 20 years’ career in the service.“The directors met again and still insisted on my dismissal over the same article ignoring my written defence. They even made a mockery of the Automatic Employment the government offered me as a recipient of Presidential National Youth Service Corps (NYSC) Award for meritorious service in 1994.“In page 6 of the minutes of their meeting of June 11, 2013, the Directors indicated their disdain for merit and demonstrated their jealousy when they stated that “the officer (Yushau Shuaib) came into the service by accident and it was advisable that he should go the same way.”“However, the Legal Adviser Olatunde Bashir, who was a mere observer at the meeting, had a different opinion on their recommendation for my dismissal. He cautioned that “the proper disciplinary procedure be followed and maintained that he (Bashir) would concede to final recommendation of the committee if the falsehood alleged in their query had been proved by the Ministry.”“The Permanent Secretary of the Ministry, Mrs Kehinde Ajoni, on behalf of the Directors finally wrote a letter dated June 14, 2013 (Ref: FMI/PP.19463/C/38) to the Federal Civil Service (FCSC) recommending my dismissal from the public service because of the article on Dr Okono-Iweala.“Some of the signatories to the minutes who recommended my dismissal included not just those I held in high esteem but who pretended to be friends. They included Oqua E. Eta, Director Human Resources and Charles Chikezie, Director Public Communication.“Rather than heed FMI’s advice for my dismissal, the FCSC in its magnanimity recommended my premature retirement from the public service on June 26, 2013. Even though I would have voluntarily retired from the service.“I sued the Finance Minister, Dr. Ngozi Okonjo-Iweala, FMI and FCSC for the unlawful retirement through the Bamidele Aturu Legal Chamber. Barrister James Ode Abah who stands as my legal counsel, from the chamber, fights vigorously in the court in four years of the legal battle.“During the fracas, I attended a Seminar organised by the Netherland Embassy where I spoke on Security Media-Relations. In attendance were top spokespersons, editors and publishers including General Chris Olukolade of DHQ, Manir Dan Ali of Daily Trust, Dapo Olorunyomi of Premium Times and Professor Ralph Akinfeleye of the University of Lagos.“Strangely after publishing my experience on the Seminar in a syndicated article, I was invited by the National Security Adviser (NSA), Sambo Dasuki.“I was surprised he had a positive impression through a strongly recommended dossier on me written by an Igbo military intelligence officer.“I politely rebuffed his attempt to lure me back into the service not even on an offer of a Director position in a critical institution. However, I gave a condition to work as a Consultant with a regular meeting with spokespersons of security and response agencies. Dasuki approved my proposal after liaising with the Presidency”.Shuaib paid glowing tributes to Dasuki for identifying his sense of patriotism and hard work to the country and for appreciating same by allowing him to contribute his quota to the general development of the country.He also showered encomiums on a military of Igbo extraction who also identified his ability to deliver and recommended him to the office of the NSA for a deserved appointment.