The Chief of the Air Staff, Air Marshal Sadique Abubakar, has approved the training of 450 carefully selected Regiment personnel as Nigerian Air Force (NAF) Special Forces to be trained in 3 batches, the first of which was formally flagged off during the weekend.

The training is taking place at the NAF Regiment Training Centre in Kaduna but is being conducted by FOUR-TROOP, a reputable foreign military training organization from Israel. It is aimed at further developing the capacity of the personnel to fight under all types of terrains and weather conditions.

At the end of the 9-week course, successful participants would be deployed to defend NAF air assets and bases as well as critical national infrastructure and assets like airports and oil installations, among others. The Special Forces would also be required to take the battle to the adversaries whenever necessary.

While flagging off the training of the first batch of 150 personnel, the Air Officer Commanding Ground Training Command, Air Vice Marshal Samson Akpasa, stated that a robust counter-force to respond to any contingency was vital in Nigeria’s contemporary security environment, which was characterized by insurgency, militancy, oil theft, cattle rustling, kidnapping and other vices. He added that as conflicts become more complex and diverse, a force multiplier unit such as the Special Forces would enable the tactical commander gain an upper hand in battle.

He, therefore, urged the trainees to be physically fit, mentally alert and psychologically sound in order to learn and assimilate instructions that would be passed to them in the course of their training programme. He then thanked the foreign partners, especially the ‘FOUR TROOP” company, for accepting to conduct the training.

Earlier, the Commandant of the NAF Regiment Training Centre, Group Captain Isaac Subi, had disclosed that the NAF Regiment Specialty was a blend of the Army Infantry and Artillery Corps. He also described the Special Forces an invaluable adjunct to conventional forces and that they are capable of sophisticated, specialized and measured response in a complex air-ground environment covering both land and sea areas.

The decision to invite the Israelis to conduct the training in Nigeria, in conjunction with other Nigerian instructors, rather than conducting the training overseas, is aimed at further developing the instructional capacity of NAF personnel while also saving the nation additional expenses in foreign currency. 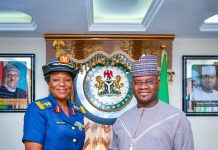