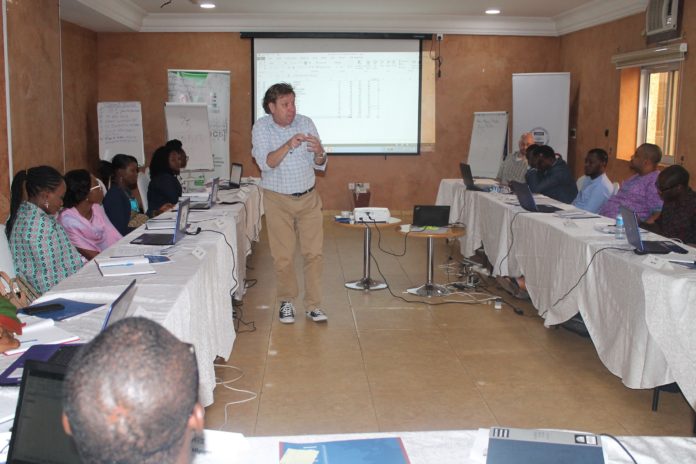 The Youths Initiative for Advocacy, Growth and Advancement (YIAGA) have concluded a 3-day Academy training on Parallel Vote Tabulation (PVT) for its Watching the Vote (WTV) team billed to observe the upcoming Gubernatorial elections in Anambra state. The training is part of preparation by the WTV team for the upcoming Anambra elections as YIAGA will be deploying a competent team of observers to the November elections for observation Parallel Tabulation.

The training academy which kicked off on Wednesday, 2nd August 2017, with both theoretical and practical sessions relating to elections observation, ended on Friday as participants went home with a wealth of knowledge on PVT method and its importance towards deterring fraud, providing information and possibly increasing participation during elections in Nigeria.

The 3-day training organized by the Youths Initiative for Advocacy, Growth and Advancement (YIAGA) in collaboration with the National Democratic Institute (NDI) and United States Agency for International Development (USAID) highlighted the importance of elections in a democratic setting and the need to have a peaceful transition of power from one government to another.

Richard Klein, a senior advisor, from NDI election who led the training explained that the PVT method is the use of statistical stratification and randomization to arrive at most accurate and timely information about voting and counting while also verifying the accuracy of elections result. The aim according to Klein is not to undermine the electoral commission but to ensure the commission remains on their toes while abiding by the basic standards of conducting elections.

According to Richard, the PVT was first developed in 1986 by a group called NAMFREL in the Philippines to verify the highly suspicious continuous reelection of the then President Ferdinand Emmanuel Edralin Marcos. The PVT team which consisted of citizens observers successfully revealed how President had lost the elections which led to the end of his reign.

The PVT was also successfully ended the 27 years reign of former Zambian President Kenneth Kaunda when a group of citizen observers called Z-vote revealed to the public how Kaunda had woefully lost the 1991 elections but the electoral commission announces him as the winner. The accurate figures obtained via PVT analysis left Kaunda with no choice but to step down. History also has it that PVT has registered immense success in countries like Tunisia, Burkina Faso, Ivory Coast, Ghana and Nigeria. Some members of YIAGA also relayed their experiences during previous elections in Ekiti and Ondo state where PVT was previously used.

Participants also enjoyed several practical sessions on determining sampling sizes of observers and also stratification of observers to various Polling Units for observation while also breaking using the data from Zambia 2016 elections to draw samples. Other calculations include the margin of error which determines the precision of data received by Polling Units observers which is usually based on sample size and homogeneity of data.

Organizers advised the WTV team to remain strictly non-partisan and neutral while remaining truthful, honest and dedicated to the course of the project. While timely and accurate information remains the crux of the PVT project, participants were also urged to follow all protocols, rules and procedures governing election observation in Nigeria as instituted by the Independent National Electoral Commission.

Speaking after the training, the project director, Cynthia Mbamalu thanked the organizers and donor agencies for their efforts while urging participants to make the best of the opportunity. Mosope Adediran, a participant from the WTV team also said the training has been very expository and Information technology based which will aid observers. According to another participant, Moses Oluwaseun, a Zonal Project Officer with the WTV team, the PVT Academy is a worthy experience which provides a platform of making impact positive impact on Nigeria. It is a knowledge base capacity development opportunity which not only enhances capacity but position any organization towards greater advancement. Victoria Manya, another participant also advised prospective adviser to make use of their checklist to speak for the nation.