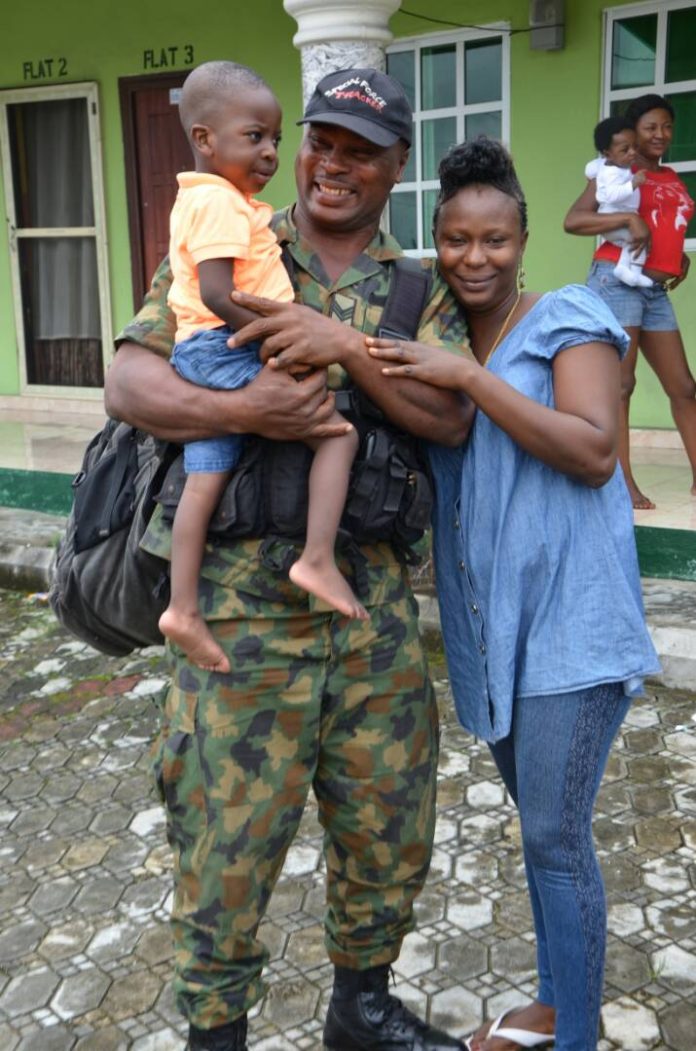 Troops Reunite with Families in after Operations in North-East

In line with the Chief of Army Staff (COAS) Lieutenant General TY Buratai’s determination of rotating overstayed troops operating in the northeast as part of Operation LAFIYA DOLE, soldiers of 29 Battalion based in Port Harcourt, have been rotated and returned to their main unit amidst cheers and jubilation from their families and colleagues.

The troops have served in various units under Operation LAFIYA DOLE where they contributed immensely to the successes of routing out and defeat of the Boko Haram terrorists in the North East.

In his address to the returnees, the General Officer Commanding (GOC) 6 Division Nigerian Army, Major General EO Udoh,  welcomed the troops back to their unit after a successful tour of duty in the North East and applauded them for their selfless sacrifices to the nation.

He further enjoined them to pray for their colleagues who are still in the theatre for God’s protection and continued victory over the remnants of the enemies of our great nation, Boko Haram terrorists.

The GOC further reassured the troops on their welfare and that of their families. He also enjoined the troops to remain professional in discharging their duties with the love of their country at heart as they would soon be deployed for the Division’s routine operations after their disembarkation leave.

The rotation of overstayed soldiers in Operation LAFIYA DOLE is ongoing as more troops are being inducted while those that stayed long are de-inducted  from the theatre of operations.