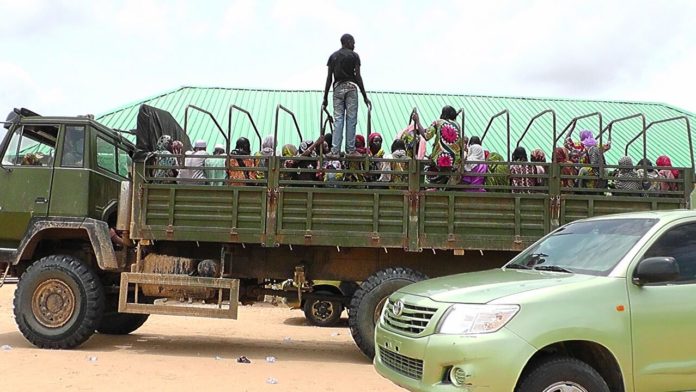 The Nigerian troops have rescued about 300,000 hostages after recapturing territories occupied by Boko Haram Terrorist in the North-East.
The Chief of Army Staff, Lt General Tukur Buratai made the disclosure at the Inaugural Annual Conference of Guild of Corporate Online Publishers of Nigeria (GOCOP) in Lagos.
Represented by Major General Peter Dauke, General Officer Commanding 81 division Lagos, the army chief delivered a paper on “Counter- Insurgency and Role of the Nigerian Army in Creating Conducive Environment For Nigeria`s Economic Development.”
According to him, the restructuring of the army’s operations in the North-East in 2015 yielded fruitful results. He said: “This restructuring changed the counter insurgency strategies by adopting aggressive posture, effective command and control, efficient use of weapon and logistics with particular attention to welfare of the troops.”
Buratai said: “Furthermore, not less than 1,009 Boko Haram terrorists have surrendered voluntarily, while 1,140 others have been arrested and another 1,500 confirmed boko haram terrorists are under investigation.”
The Army Chief regretted that the economic impact of Boko Haram activities in the North East is estimated at $9 billion where Borno had the highest impact estimated at $5.9 billion. He added that loss of agricultural production in the North East caused by terrorist activities was $3.5 billion.
On accommodation, the army chief said Borno had 95 per cent of the 400,000 houses damaged by Boko Haram.
He stated that with improved security, the Borno Adamawa and Yobe governments had embarked on reconstruction of damaged schools, bridges, hospitals and other critical infrastructure aimed at recreating socio-economic activities of the areas.
Buratai said that in keeping with its constitutional mandate of defending the nation, the army would ensure that the right atmosphere to promote economic development was maintained in the country.
By PRNigeria