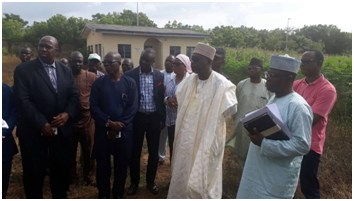 In its determination to provide all year round farming in meeting with the agricultural drive of the Federal Government, the Federal Ministry of Water Resources in line with its Roadmap is to revitalize the Middle- Ogun Irrigation project in Oyo State.

The Middle-Ogun Irrigation project was awarded in December, 1990 with a completion period of 30 months. It was conceived to have 12, 000 hectares of irrigable land and it was undertaken by the Federal Ministry of Water Resources. The project is meant to serve the people of Oyo and Iseyin communities of Oyo State.

According to the minister, only 680 hectares of the 12, 000 hectares potential of the land have so far been developed due to some operational challenges which include; high cost of diesel to fuel the generators, linkage of the system with National grid, lack of cooperation from the farmers, funding issue amongst others.

Adamu who was very sad about the state of the project said that in line with the ministry’s roadmap of completing ongoing projects, the project will be resuscitated by the Federal Government through Private Partner Participation (PPP). Also, government will get the project connected to the National grid for easy access to power supply.

“We need to get our irrigation projects working because the policy drive of the present administration is on food security through all year round farming. So we need to revitalize those that are not working and expand those that are working”, he said.

He called on the communities especially where the 3rd phase is located; Oyo to make their land accessible for the project as it will benefit them economically.

Earlier, the minister paid homage to the two traditional leaders of the domain, the Alafin of Oyo, His Imperial Majesty Oba Lamidi Olayiwola and Aseyin of Iseyin, Oba Abdul Ganiy Adekunle Salau. The Alafin commended the Federal Government through the minister for choosing to complete some abandoned water projects in the state. He said that the vision of the founding fathers of the project will not be in vain as the Federal Government is now desirous of bringing them back to live.

He promised to talk to the community farmers to cooperate with the Ogun- Osun River Basin Development Authority and the Federal Ministry of Water Resources to give access to their land for government irrigation purpose.

While he thanked Federal Government for funding the Oyo Regional Water Scheme at Erelu, he pleaded that the project be completed in good time to serve the people of Oyo State.