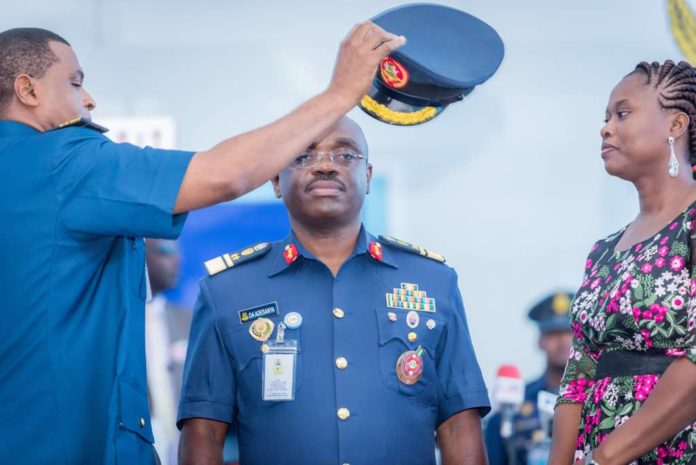 The Nigerian Air Force (NAF) today decorated 22 Air Vice Marshals (AVMs) and 28 Air Commodores who were recently promoted by the Air Council. This was the first time such a large number of senior officers would be promoted and decorated by the Service.

Also, decorated posthumously was Late Air Commodore Gabriel Ochai who died in an air crash on 24 August 2017 in Kaduna.  His wife, Mrs Rita Ochai was in attendance to receive the rank insignia on behalf of her late husband. This was done in an effort to sustain the morale of NAF personnel who fight day and night to keep the country together.

The Chief of the Air Staff (CAS), Air Marshal Sadique Abubakar, who decorated the senior officers alongside other dignitaries and their spouses stated that the promotion of the senior officers was premised on their past excellent performances and the resolve of the Service to constantly reward excellence. “Promotion is not a right but a privilege given to selected deserving officers to enable them undertake higher responsibilities,” the CAS added.

The CAS reminded the newly promoted senior officers to be always guided by the Service’s social contract with the Nigerian people. According to him,  “Nigerian tax payers would expect the new generals to work harder to ensure that their communities are stable, safe and secured”.

Air Marshal Abubakar congratulated the newly decorated senior officers and their families while advising them to show commitment to their responsibilities and uphold the core value of excellence for which the NAF is renowned. The CAS charged the newly decorated senior officers to rededicate themselves to the service of the nation and brace up for the challenges ahead.

Earlier in his welcome address, the Chief of Administration (COA), Air Vice Marshal Lawal Alao, noted that the Armed Forces of Nigeria annually undertake promotion exercise to motivate its officers towards rededicating themselves to assigned duties and service to the nation.

He pointed out that the NAF has done well and made history by promoting 22 Air Vice Marshals and 28 Air Commodores. This, he said, was a demonstration of pragmatism, visionary leadership and commitment by the CAS and the Air Council to sustaining the morale of NAF personnel.

The CAS and selected dignitaries, all of who were assisted by the spouses/relatives of those being decorated, decorated the newly promoted senior officers.