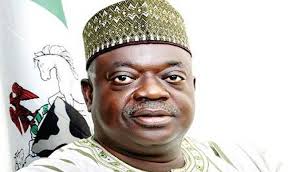 EFCC Tenders Documents Against Ex-Niger Gov, Aliyu
The trial of a former governor of Niger State, Babangida Aliyu, on an eight-count charge of money laundering to the tune of N2billion continued on February 21, 2018, before Justice Yalim Suleiman Bogoro of the Federal High Court, sitting in Minna, Niger State, with prosecution tendering documents to establish the complicity of the defendant in the alleged offence.
Nma Abubakar Mohammed, a branch head of Zenith Bank situated at Paiko Road, Minna 1, Niger State, who testified as PW3, told the court that the defendant made withdrawals of 10million naira each in eighty places using the account of I.D Sabin Investment Limited.
Led in evidence by Ben Ikani, counsel to the EFCC, Mohammed, said he was invited by the EFCC sometime in June 2014 to clarify some transactions on the account of I.D Sabin Investment Limited, an account owned by Saidu Nma-Aba Idris.
The witness narrated the procedures required for opening an account in his branch saying:
“The customer will obtain account opening form. If it is a corporate account, the customer is required to bring all documents especially from the Corporate Affairs Commission, CAC. There must be two eligible referees, there must be board resolution authorizing the opening of the account. There must be means of identification. There must be public utility receipt. The signatories must provide their passport photographs. They must also give their mandate on how the account is to be operated and any other document required shall be involved”.
According to the witness, I.D Sabin Investment met all the requirements while opening the account.
When asked to tell the court about the inflows into to the account, Mohammed said, “Going through the statements of account, there were withdrawals of 10million naira each in eighty places and some other withdrawals”.
The prosecution sought to tender the account opening package in evidence, after it was shown to the witness and identified but, Nasko’s counsel, Mamma Mike Osuman, SAN, objected to the admissibility of the documents on the ground that they did not satisfy the provisions of Section 104 (1) (2) and (3) of the Evidence Act.
Osuman took time to fault each of the documents and urged the court to reject it in its entirety.
Aliyu’s counsel, Olajide Ayodele, SAN, also aligned himself with Osuman’s position.
In response, Ikani urged the court to discountenance the objections of Osuman describing it as “unfounded”.
After listening to the submissions of counsel, Justice Bogoro held that the document from FIRS; the PHCN document dated February 28, 2013; the two-page National Identity Card and the documents from Corporate Affairs Commission (Certificate of Incorporation) were inadmissible. He believed that the documents, being public documents need proper certification from appropriate authorities.
However, the judge ruled that “the other documents from the Zenith bank including: Application To Opening a Corporate Account; Letter of Set Up, Signatory, Information Form, I.D Sabin Investment Limited’, addressed to the branch manager Zenith Bank PLC Minna, A Document Physical Visitation Report of Zenith Bank, Authority to Debit an Account dated March 2, 2013, Customer mandate, Corporate Account Money Laundering and Terrorism Financing Risk Assessment Form, Zenith Bank”, duly certified by the PW3 were admissible.
“I shall admit the documents each in evidence”, the judge said.
Thereafter, the prosecution sought to tender the Statement of account of I.D Sabin Investment Limited after it had been identified by the witness. Though its admissibility was objected to by Osuman, his objection was overruled and the documents were admitted as ‘Exhibits U and V’.
The court also admitted the cheque books used for the transactions as ‘Exhibits V1 – V18’.
The PW3 further told the court that the Niger State Ministry of Environment also had an account with his bank and that “some inflows came into the account, while some were transferred to I.D. Sabin Investment limited”.
The account opening document for Ministry of Environment, Niger state was tendered and admitted as ‘Exhibit S25’.
Similarly, the computer print of the inflow of the account of Ministry of Environment was also tendered and admitted as ‘Exhibits AB1 and AB2’.
The matter was thereafter adjourned to April 10 – 11, 2018 for continuation of trial.
Aliyu, fondly referred to as “Chief Servant” during his time as governor is being prosecuted alongside his then Chief of Staff, Umar Nasko by the Economic and Financial Crimes Commission, EFCC.
The defendants were accused of laundering ecological funds released by the Federal Government to Niger State sometime in 2014.
Wilson Uwujaren
Head, Media & Publicity
22 February, 2018