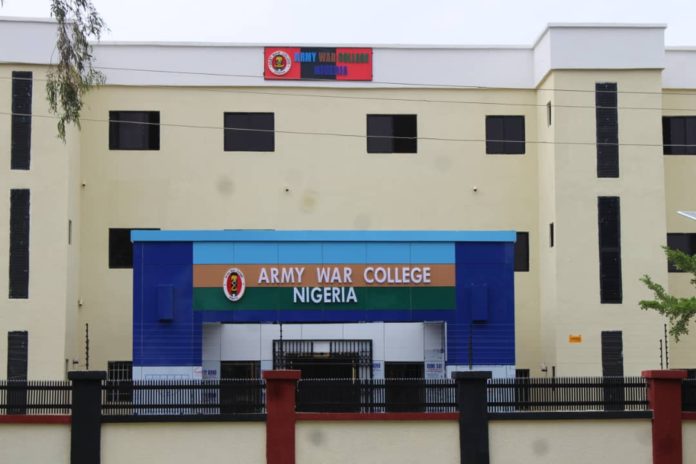 General Buratai Commissions Army War College
The Chief of  Staff (COAS), Lt. Gen. Tukur Yusuf Buratai today commissioned the new Army War College Nigeria Complex situated in WU Bassey  Barracks, Abuja.
The multi-billion naira edifice was built and completed by the current leadership of the Nigerian Army within a space of four months.
Speaking at the event, Gen. Buratai said the establishment of the Army War College Nigeria (AWCN) was to basically develop the capacities of Nigerian Army officers at the operational level.
He said the college is poised to be a regional centre of excellence that would give a professional military excellence to middle cadre officers as well as provide for them to rethink and re-strategise on the best approach to confront security challenges facing the nation.
“ The commissioning of this citadel of learning is an important event in the calendar of the Nigerian Army as part of efforts necessary to meet the Nigerian Army operational needs” he maintained
He further said that the college was carefully designed and the structure painstakingly put in place to ensure that the participants get optimum learning experience .
According to the Army Chief “The Nigerian Army is determined to be proactive in dealing with the challenges in the country. The ever changing environment that we live requires new mental models which promotes creativity, critical and systems thinking skills, as well as deep understanding of operational art and campaign planning. I am very confident that these strategic skills along with other relevant ones thought at the college will form the fulcrum and flagship of the institution,
General  Buratai also used the occasion to task serving military personnel to remain apolitical, stating that any attempt by anyone to politicise the noble profession will be decisively dealt with.
Earlier in his remarks, the Commandant, Army War College Nigeria, Major General John Enenche thanked the Chief of Army Staff for his unreserved commitments  towards the institution.
Gen. Enenche said the curriculum of the institution is well structured with a focused course content towards the promotion of learning in a conducive environment.
The newly built Army War College hostel
The new complex is a three floor edifice with 29 offices, 8 syndicate rooms, Library, work production centres, lecture halls, hostels and auditorium.
The ceremony witnessed the presence of top military personnel, representative of the Chief of Defence Staff, Service Chiefs, Inspector General of Police, Directorate of State Security Service and officials of the Nigerian Army Officers Wives Association as well as principal officers from Defence and Service Headquarters among others
By PRNigeria