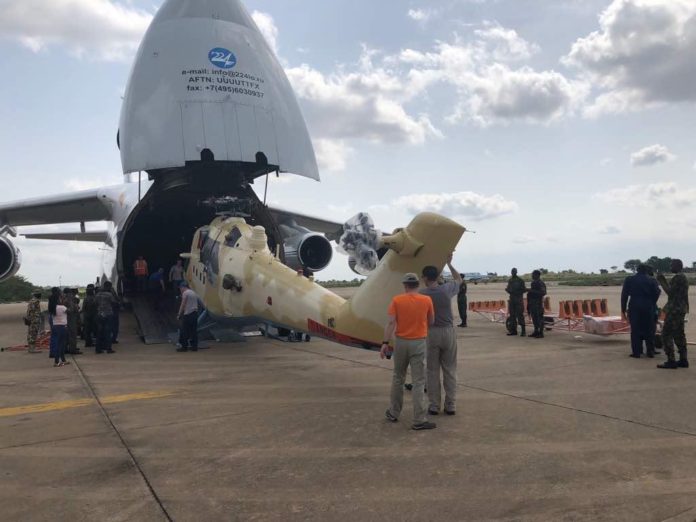 The Nigerian Air Force (NAF) today, 30 April 2018, took delivery of two Mi-35M helicopter gunships that the Federal Government had since ordered from Russia.

The Antonov aircraft, which brought the new Mi-35M helicopters, touched down on the runway at NAF Base Makurdi at exactly 12.20pm today. The Chief of Aircraft Engineering at NAF Headquarters, Air Vice Marshal Abdulganiyu Olabisi, received the new aircraft on behalf of the Chief of the Air Staff, Air Marshal Sadique Abubakar.

A combined team of NAF personnel and Russian technicians were also on hand to assist in offloading the partially assembled new helicopters, some parts of which came in crates. In addition, officials of the Nigeria Customs Service and the Nigeria Immigration Service were present to ensure necessary documentation. The newly delivered helicopters, which are capable of night fighting, are all brand new and are the most sophisticated in the Mi-series of helicopter gunships.

The newly received combat helicopters form the second batch of the fleet of Mi-35M helicopters, the procurement of which the current Federal Government Administration initiated in Year 2015. At the inception of the current NAF leadership in 2015, it was realized that modern Mi-helicopter gunships with night-fighting capability needed to be procured towards enhancing the operational capability of the NAF.

Consequently, the delivery of the helicopter gunships would go a long way in adding impetus to the current efforts at combatting the security challenges in Benue State and other parts of the North Central Region as well as other forms of criminality facing the country. In addition, with the delivery of the additional Mi-35M helicopters, the on-going counterinsurgency operation in the Northeast has just received a boost.

It would be recalled that the NAF took delivery of the first batch of 2 brand new Mi-35M helicopters in December 2016, following which the helicopters were inducted and had since been contributing significantly to the counterinsurgency and other Internal Security operations in the country. Furthermore, some NAF personnel had undergone training in Russia, as Pilots and technicians on the Mi-35M helicopters, as part of the contract. Sequel to the hitch-free delivery, a team of Russian and NAF technicians will now complete the assembly of the newly received helicopters in Nigeria prior to test flying. Thereafter, the helicopter gunships will be formally inducted into the NAF, as part of the activities to mark the 54th anniversary celebrations of the Service.

Meanwhile, as part of activities lined up to mark the Nigerian Air Force (NAF) 54th Anniversary Celebration, an Interdenominational Church Service was held yesterday, 29 April 2018, across all NAF Units and Abuja. In Abuja, the commemorative service was held at the Protestant Church, Bill Clinton Drive NAF Base, Abuja.

The Church Service, which attracted a large turnout of Christian worshippers including NAF personnel, was held to appreciate God for his mercies over the NAF in spite of contemporary challenges. The Chief of the Air Staff (CAS), Air Marshal Sadique Abubakar, who was represented at the service by the Chief of Standards and Evaluation, Headquarters NAF, Air Vice Marshal Kingsley Lar, stated that the NAF had every reason to be grateful to God, based on its significant contributions to national security in the last 54 years. The CAS, noted that the 54th Anniversary Celebration of the NAF presents a unique opportunity for personnel not only to celebrate but also reflect on the need to redouble their efforts in ensuring that the nation is secured and conducive for all citizens to carry out their legitimate businesses.

Air Marshal Abubakar assured NAF personnel that his administration would continue to work harder to ensure that they have the required equipment and resources to discharge their duties effectively. He then reminded them of the need to continually add value to the Service for effective and efficient service delivery irrespective of their cadre and capacity, towards enhancing national security. According to him, “in the race to add value to our society, there is no finishing line”. Speaking further, the CAS stated that in the last 2 years and 10 months, the NAF had witnessed tremendous growth in all facets of the Service in terms of human capacity development, personnel welfare, serviceable platforms, robust logistics support and expansion, amongst others, to meet the demands of national security. “I want to say that it has not been easy; like any other establishment, there will be period of difficulties but by and large, the NAF has reasons to celebrate. In modern warfare, air force is the most critical component and without doubts, the NAF has continued to discharge its constitutional responsibilities very well,” he said.

In his sermon, the Chaplain of the NAF Roman Catholic Church, Abuja, Group Captain Philip Kwasau implored all Nigerians, especially Christians, to return to the path of God in order to get it right, stating that there was no difficulty or problem that God could not solve. “We are celebrating the greatness of Nigeria, if Nigerians could go on their knees and pray in humility for God’s intervention, he will listen to us and rescue our nation. We shall overcome the challenges facing the nation if we return back to God”, the Chaplain said. The NAF he noted remains one of the key components in the national security whose role cannot be overemphasized. According to him, the NAF had written its name in gold with great impact in restoring peace both within and outside the nation, noting that the greater impact is yet to come. Intercessory prayers were later offered for the nation, the NAF leadership and personnel and those involved in the counterinsurgency operation and other Internal Security operations across the country as well as families of personnel who had paid the supreme price in the defence of the nation.

It would be recalled that the NAF had earlier on 27 April 2018 held a Juma’at Service at the NAF Central Mosque, NAF Base Abuja to commemorate the 2018 NAF Day celebration slated for 3-6 May 2018 in Kaduna.