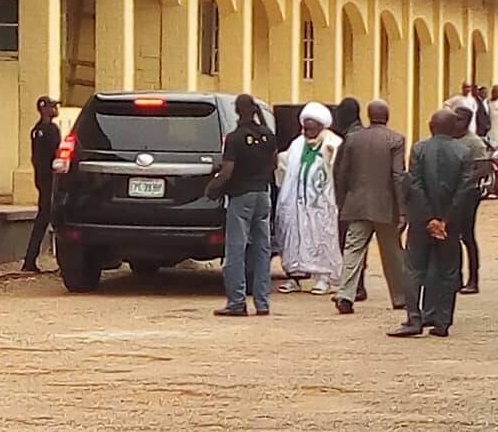 Today Tuesday 15/05/18 some armed security men whisked away our illegally detained Leader Sheikh Ibraheem Zakzaky from where he has been in detention illegally in Abuja, and brought him to court 4 in Kaduna standing trial for some trumped up charges that include murder. As of now we don’t know in what condition they brought the Sheikh, whom we know suffered stroke in January apart from the gunshot wounds he sustained since the murderous attack on him in December, 2015.

We find this latest attempt to provoke the Islamic Movement as an attempt by the federal government of Buhari to kill our leader, since Allah has spared him his life from the murderous attempt of the Nigerian army in December, 2015. We hereby categorically declare this as unacceptable and the federal government will be held responsible for anything untoward should happen to our revered leader.

We strongly condemn the way the gentlemen of the press were denied access to the court to witness the trial and inform the world what transpired. To hide under the guise of security issues and prevent the world from witnessing the trial is a travesty of justice.

It is a shame that the government that refused to obey a court order freeing our leader in 2016, will now turn round and prosecute him in another court. This smacks off selective respect to courts and judgments.

We believe the trumped up charges on Sheikh Zakzaky is part of the Saudi sponsored agenda to kill Sheikh Zakzaky and destroy the Islamic Movement in Nigeria, as can be adduced from a recent interview the Saudi Crown prince, Muhammad Bin Salman had with Times magazine. Surely money must have exchanged hands on this plot, and we will like the federal agents to disclose what actually transpired and those involved.

We will continue with our protests demanding Sheikh Zakzaky’s freedom on the streets of major cities of Nigeria, Abuja in particular, till when the federal government decided to obey the federal high court’s order releasing our leader and his wife.

We will not be deceived into believing that the federal government has no hand in this latest ploy to kill Sheikh Zakzaky, President Buhari will and must surely be blamed for anything that happen to Sheikh Zakzaky. It is crystal clear to all and sundry that the federal government has no intention of solving the crisis it created when it murdered 1000+ people in Zaria peacefully.

We totally reject this move of presenting our sick leader by force to a court in Kaduna for sundry charges that some people are standing trial for. For now we pray to Allah strengthen our leader and keep him safe, while we face the might of the Nigerian state on the streets.