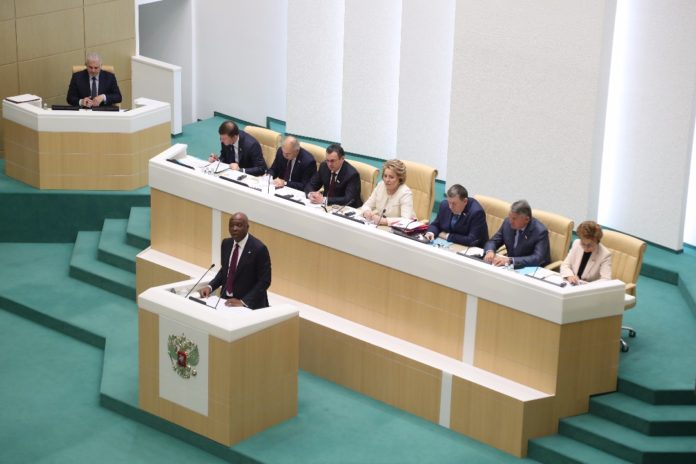 In the address which was historic – being the first head of the Nigerian legislature to perform such a function in Russia – Saraki called for a stronger security, economic and cultural cooperation between Nigeria and Russia.

The President of the Senate thanked the Chairperson of the Federation Council, Ms. Valentina Matviyenko for the invitation to visit the Russian Parliament and expressed confidence that the event would mark a new phase of inter-parliamentary cooperation between the two nations, as well as a springboard for renewed vigour in Nigeria-Russia relations in general.

He insisted that since aid alone cannot mitigate the enormous socio-economic challenges confronting the country, it is imperative for both countries to engage in partnerships that would “open the door to new investments and other opportunities.”

Saraki said: “Nigeria’s leadership role in Africa is unassailable. An improved relationship between us would be a definitive pathway to a stronger relationship with the whole of Africa.

“Let us, therefore, pledge to revitalise the ties between our two countries. It is important, at this point, to stress that the relationship we seek is one based on partnership.

“We recognise that aid alone will no longer sufficiently tackle the challenges ahead. Partnership, on the other hand, will open the door to new investments and other opportunities.

“It is for this reason that we in Nigeria are putting a lot of effort into ensuring that we build a strong foundation for the future and one of the ways we are doing that is by deepening links with other parliaments such as yourselves, because legislation is a necessary key to unlocking potentials in people, and delivering better prospects for citizens.

“I therefore come to you today as an economic ambassador of Africa’s largest economy. Our economy is increasingly stable and offers immense potential for investment.

“Our people are self-motivated, ambitious and seeking new opportunities and avenues to make their mark in the dynamic world of today. And I say to you: let us work together to explore new and exciting areas of cooperation and economic opportunities that will be mutually beneficial to our peoples.

“For us, there are compelling arguments for looking to Russia. I say this for the obvious reason that our two countries share certain, striking similarities,” he said.

Saraki noted that in the emerging global order, world powers are looking to Africa because “Africa is not merely rising; Africa is here. There is a world of opportunities on the continent.”

According to him, the 54 nations of Africa represent a huge geographical bloc with enormous potential for investment and strategic partnerships that would benefit only those that venture.

“Our position, therefore, is simple: those who are serious about expanding their interests in Africa must necessarily see Nigeria – the powerhouse in the region – as the gateway to the continent,” he said.

He further called on the Russian Government to reckon with Nigeria as the central area of focus in Africa, by taking a more serious view of its longstanding ties with the country.

“I make this point because we are not seeing enough of that at the present time. There is a vacuum currently, and the reality is that no other country can take your place.

“As a fellow oil producing nation, we do believe that Russia has a keen insight on some of the challenges we face in Nigeria with regard to the economy, as well as our drive towards diversification.

“As your economy, like ours, recovers from recession, we say that part of the consolidation process must be a stronger focus on Africa, and Nigeria in particular.

“As leaders of our nations’ parliaments, therefore, we must think of not just today but well into the future, to pursue and implement initiatives that release the potentials of our peoples in their desire for economic development.

“With Russia and Nigeria projected to be the biggest economies in Europe and Africa respectively in just three decades from now, it would be a travesty if we did not strive to strengthen cooperation and partnership to reap the gains in terms of GDP growth.

“As the country with the biggest gas reserves on earth, Russia should be a leading player in the African oil and gas sector. Stronger collaboration for gas development would help Nigeria solve acute problems of power generation as well as provide for other local uses.

“The time is ripe to redefine the relationship between our two countries, based on partnership, to improve the state of infrastructural and economic development, for the good of our people,” he said.

He said that Nigeria and Russia need to collaborate more to develop common strategies for tackling the problem of terrorism and human trafficking as their contribution sustainable peace in the larger world.

“Terrorism is a global threat. What affects one, affects all; and we look to Russia to join us in building stronger collaboration for the fight against this common enemy. Terrorism, most significantly in the shape of the Boko Haram sect, has continued to pose a serious challenge to the internal security of Nigeria.

“When, at the height of the crisis, we were having difficulty obtaining international support, Russia memorably saved the day by supplying military equipment and assisting us with the training of personnel.

“We are grateful that you did not abandon us in our hour of need. While Boko Haram is largely decimated now, the threat remains, and new terrorism challenges are arising; one of these being the Herdsmen-Farmers’ crisis that constitutes a clear and present threat to our national security.

“We hope for your continued cooperation and partnership towards combating the threat; and with your support, I have no doubt that Nigeria will prevail,” he said.

Sanni Onogu
Chief Press Secretary to the President of the Senate