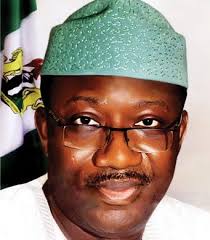 The indictment for fraud and the abuse of office and the 10 years ban from holding public office imposed on former minister of Solid Minerals Dr. John Kayode Fayemi by Ekiti State government have been quashed by an Abuja High Court.
The Court dismissed a suit seeking to bar the All Progressives Congress (APC) from fielding Fayemi as its candidate in the Ekiti Governorship election slated for this month.
Justice Oathman Musa, in a judgment in Abuja, dismissed the suit instituted by the Action Peoples Party (APP) against Fayemi, APC and Ekiti State government on the ground that it was frivolous, baseless and without merit.
The party (APP) had argued among others, that Fayemi’s indictment by a commission of inquiry set up by the Ekiti state government to probe his administration, and the white paper issued by the state based on the indictment, disqualified Fayemi from holding public office by virtue of Section 182(1)(i) of the Constitution.
Justice Musa quashed Fayemi’s purported indictment by commission of inquiry and the white paper on the grounds that the ‎process leading to the report and white paper was tainted with bias as Fayemi was not accorded fair hearing.
The judge noted that Section 182(1)(i) of the Constitution, on which the suit was based, was no longer in existence having been deleted in 2011 by the National Assembly through the first alteration of the 1999 Constitution.
Justice Musa who answered the two questions posed by the plaintiff in the negative, refused all its prayers and declared the Fayemi was eligible to contest the next Governorship election and that the APC was at liberty, under the law to field him as its candidate.
Specifically, Justice Musa held that section 182 of the 1999 Constitution was no longer a valid provision in the constitution having lawfully deleted by the first Alteration Act 2011 and as such, no Nigerian citizen can be disqualified from the section.
Besides, the judge said that by virtue of several Supreme Court decisions, mere indictment and white paper are mere administrative decisions and cannot be used to disqualify any citizen from holding public office.
The Abuja high court further held that citizens can only be indicted by court of laws after fair trial adding that even if the white paper and the section 182 was not deleted, the process leading to the commission of enquiry report was tainted with bias because there was no evidence that Fayemi was invited as an accused person to defend himself from the corruption charges by the tribunal.
The judge held that from the available evidence, Fayemi a former governor of Ekiti State was invited as a witness to assist the tribunal with information and that the tribunal set aside the objection raised by Fayemi but did not go further to issue another invitation to him to appear as an accused person as required by law.
In addition, the court faulted the purported indictment and the ban by the Ekiti state government, because Fayemi was not served with necessary processes that would have enabled him defend himself.
Justice Musa held that despite the fact that Fayemi was not invited as a defendant, the commission of enquiry went ahead in an absurd, bias and tainted manner to indict him in gross violation of the right of the former governor to fair hearing as enshrined in the constitution.
The judge therefore quashed the purported indictment and the 10 years ban placed on Fayemi and declared that he (Fayemi) is constitutionally qualified to contest any election and hold any public office.
The Ekiti state government under Governor Ayodele Fayose had instituted a commission of enquiry which probed the administration of Fayemi and purportedly found him guilty of misappropriation of public fund and gross abuse of office.
Acting on the purported indictment of the former governor the state had issued a white paper, gazzeted the indictment and subsequently invoked section 182 of the 1999 Constitution to impose a 10 year ban on Fayemi from holding public office.
The Action Peoples Party (APP) acting on the indictment and the ban approached the Federal Capital Territory high court to invoke section 182 of the constitution to bar Fayemi from contesting the forthcoming governorship election in Ekiti State and the APC from presenting him as a candidate in the gubernatorial poll.
However, Fayemi and APC had through their lawyer Mr. Rafiu Oyeyemi Balogun opposed the suit on the ground that the purported indictment and the ban have no legal effect since the report of the commission of enquiry cannot represent court decision that can be used to bar any Nigerian from standing for election or holding public office.
By PRNigeria