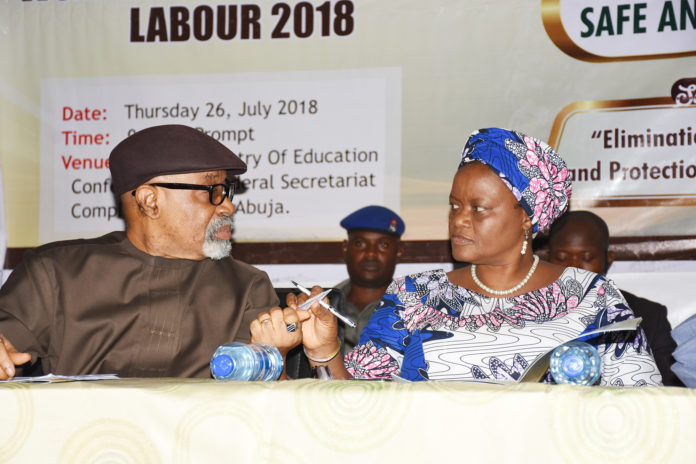 According to him “this campaign also aims at accelerate action to achieve target 8.7/alliance 8.7 of the sustainable Development Goal (SDG) which seeks among other things to take immediate and effective measures to eradicate forced labour, end modern slavery and human trafficking and secure prohibition and elimination of the worst forms of child labour.”

The Minister reiterated that child Labour is the engagement of child under 18 years of age in any work that deprive them of their childhood and the opportunity to be educated and also hamper their physical and moral development and this has assumed a global dimension and attention, hence this year’s theme is meant to awaken the need to improve the safety and health of young workers and end child labour especially in its worst forms.

“To build a generation of safe and healthy workers, preparation must begin early with parental and community awareness for young people to be aware of risks and able to advocate on their own behalf, education about work hazards and risks as well as about workers’ rights, need to start in school and continues through vocational training and apprenticeship programmes” the Minister said.

He added that practical steps must be taken to eliminate the root causes of child labour and ensure that the rights of young workers are protected within the ambits of the law. Noting that the Federal Government under President Buhari’s Administration has done a lot in the fight against child labour and will continue until it is eliminated in Nigeria.

Ngige however solicited the collaboration of frontline MDAs, workers and employers union, civil society organizations, (NGOs) and other stakeholders to create time bound child labour programmes and projects and make budgetary provision for them in line with their various mandates as encapsulated in the national action plan (NAP) for elimination of child labour and take such programmes to the communities and involve the community gatekeepers, market women, traditional rulers and children.

Speaking earlier, the Permanent Secretary Federal Ministry of Labour and Employment Ibukun Odusote said that the World Day Against Child Labour (WDACL) is set aside internationally for awareness creation, mass mobilization and activism on prevention of child labour. Stating that the Federal Government through the Ministry of Labour and Employment has done a lot to ensure that children are not engaged in child labour and young workers are dully protected and operate in safe working conditions.

She said “child labour presents a serious challenge at global and national levels and requires concerted efforts by all stakeholders to overcome the menace”.

She stressed, that the symposium to commemorate the day was very strategic as to create awareness and rub minds on the more effective ways to tackle the menace of child labour and improve the safety and health of young workers in our society.

In their separate remarks, the representative of the International Labour Organization (ILO) Agatha Kolawole, Nigeria Employers Consultative Association (NECA) Adenike Adebayo Ajala, Nigeria Labour Congress (NLC) Maureen Onyia, Trade Union Congress (TUC) Hassan Anka, and National Agency For Prohibition Of Trafficking In Person (NAPTIP) admonished the fact that the youth are the future and leaders of tomorrow, hence they should be appreciated, recognized, and regarded as valuable human assets worthy of investing upon for the very survival and continuous existence of the human race.

They also pledged their continued support and collaboration with the Government of Nigeria through the Federal Ministry of Labour and Employment to eliminate child labour and protect children within the working age.