The Nigerian Prisons Service (NPS) Lagos State Command, record another success in its efforts at enhancing security at all its prison facilities in the state, when it’s officers and men foiled an attempt by a suspect, Esther Solomon, to smuggle substance, believed to be cannabis sativa also known as marijuana into Medium Security Prison, kirikiri Lagos. 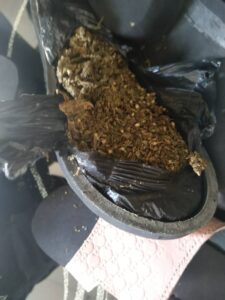 The drugs were concealed in footwears (slippers), which the suspect intended to smuggle into the prison for delivery to an inmate, who is being remanded there.

Controller of Prisons, Lagos Command, CP. TO Ladipo, while inspecting the seizure stated that the NPS has zero tolerance for illicit act of drugs trafficking into any of it’s facilities. He emphasize that the prisons is a place for reformation, rehabilitation and reintegration of offenders and any attempt to “pollute” these core aims by anyone will be strongly resisted.

The suspect has been handed over to the National Drug Law Enforcement Agency (NDLEA) for further investigation and prosecution.