The outstanding efforts of the Nigerian Air Force (NAF) in Public Relations (PR) practice and the fight against insurgency in the Northeast, have been appreciated and rewarded at the just concluded 2019 Conference of African Public Relations Association (APRA) in Kigali, Rwanda. At the Annual Conference and Awards Ceremony, the NAF received a ‘Certificate of Appreciation’ in recognition of its sterling contribution to PR development and its invaluable support to APRA activities. The NAF also received a ‘Certificate of Excellence’, in the ‘Public Sector/Government Award Category’ for its crisis communication campaigns in the counter insurgency operations in the Northeast.

The awards were presented to the NAF by the President of APRA, Mr Yomi Badejo-Okusanya, who commended the NAF for its developmental strides in PR. “The NAF is honoured for its contributions to capacity building, professional development and its outstanding PR practices in the African continent”, Badejo said. Speaking on the Certificate of Excellence in the ‘Public Sector/Government Category’, the Publisher of The Holmes Report, Mr Paul Holmes, who is also the organiser of the Annual African PR Awards, said the NAF was recognised for its robust crisis communication in the campaign against Boko Haram terrorists in the Northeastern States of Nigeria. “The Annual African PR award recognises Superior Achievement in Branding Reputation and Engagement (SABRE) by PR Practitioners and Agencies”, he said. 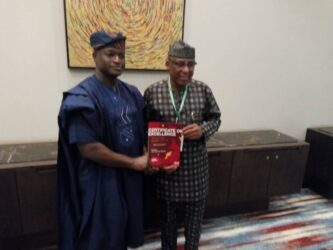 Receiving the two certificates at the event, the NAF Director of Public Relations and Information (DOPRI), Air Commodore Ibikunle Daramola, appreciated the organisers of the awards for recognising the NAF’s contribution to PR Practice. “We must commend APRA as well as The Holmes Report, the joint organisers of the Annual African PR Awards, for finding the NAF worthy of the honours. We also acknowledge Image Merchants Promotion Limited, Publishers of PRNigeria for its support and nomination of our modest contribution for these great awards”, he said. He re-emphasized that the NAF, in collaboration with other security agencies, will sustain the onslaught against insurgents and armed bandits in the country to ensure that law abiding citizens can pursue their legitimate aspirations without fear.

Various awards in different categories were presented to recipients across the African Continent during the SABRE Africa Awards Night, which was one of the major events of the 2019 Annual APRA Conference that held in Kigali, Rwanda from 13 – 17 May 2019. The Conference, with the theme “Africa and Story Telling, Changing the Narratives”, was chaired by His Excellency John Dramani Mahama, former President of Ghana.