The Governor of Kwara State, Alhaji Abdulfatah Ahmed, has paid a condolence to the family of late Alhaja Hanatu Nagode (Nee Belgore), mother of both the President of Third Estate and Justice Safiya Titi Daibu.

He described her as a successful woman and devoted mother, asking Allah to grant her paradise.

Alhaja Nagode, who is the grand-daughter of the seventh Emir, passed on last Thursday in Ilorin, at the age of 85.

In his sermon, the Grand Mukadam of Ilorin, Sheikh Sulaiman Dan Borno, said death is inevitable for all creatures.

According to him, Alhaja Nagode led a life worthy of emulation and both the children and her family should continue in that trend especially in helping the needy in the society, saying: “You should endevour to always support the people around you to grow and not impede their progress.” 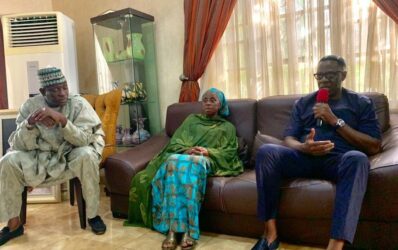 Speaking on what the children will miss most about the deceased, her son, Alhaji Ahmed Bolaji Nagode said: “We will sorely miss her, as she was a disciplinarian. She brought us all in the way of the Holy Quran and the dictates of Prophet Mohammed (SAW).

“She taught us all to be humble and to always be of assistance to our neighbours and the less privileged in the society. Alhaja spent her money on the path of Islam and even built a mosque at Mubo area in Ilorin.

“You could hear the numerous testimonies from people especially, the teenager then that she inspired to become a lawyer and the elderly man who talked about how mama stood for peace among the family.”

Speaking on his last moments with the deceased, Bolaji said: “I was in Ilorin about two weeks ago and I was with her. We even prayed together and I recited the holy Quran while I was with her. Unfortunately, I got a call last Thursday from my sister, Justice Titi Daibu, telling me that mama is dead.

“We will miss her, but we however take solace in the fact that she died on her preferred day and in the holy month (Ramadan). Alhaja before her death consistently told us that people who die on Thursday or Friday are very lucky because people pray for the dead on those two days.”