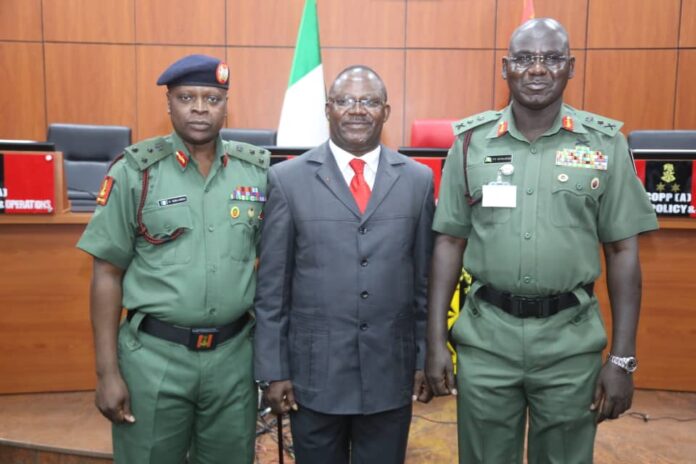 In no distant future, the Nigerian Army University (NAU) in Biu, Borno State, will become a frontline centre of academic excellence not only in Nigeria, but also Africa.

This was the optimism shared by the Chief of Army Staff (COAS), Lieutenant-General Tukur Yusuf Buratai, at the official presentation of an appointment letter to NAU’s Vice-Chancellor, Professor David Iliya Malgwi.

The colourful event took place at the Army Headquarters’ Conference, in Abuja.

Buratai, stated that NAU founder’s dream is to make the Army University a center of excellence in education, research and innovation for human capacity development, military science and technology for national development, and for the progress of humanity.

The COAS, informed guests that five faculty complex, and the Senate buildings, among other structures, are at advanced stage of construction.

Buratai, who is the Chairman of NAU’s Governing Council, urged the pioneer staff of the institution to strive and make a mark, in line with the visions the Nigerian Army leadership has for establishing the school.

He expressed gratitude to the Borno State’s Governor, Alhaji Kashim Shettima, for donating 5,000 hectares of land for NAU’s timely take-off without hitches.

He appealed to the university community to contribute their quota towards the anticipated growth and speedy development of the school, so as to compete favourably with other Nigerian tertiary institutions.

While thanking the implementation and steering committee for making the dream of establishing NAU a reality, the Lt. Gen. Buratai, also expressed deep appreciation to the people of Biu Emirate for their uncommon hospitality and accommodation.

In his acceptance speech, Prof. Malgwi, disclosed that less than a year after the school was established, NAU already has over 500 Academic and Non-Academic staff filled with a cream of renowned professors of international standing.

Malgwi, thanked the Chief of Army Staff for the relentless support he has offered him since appointment as NAU VC.

“During the period I acted, and prior to my confirmation as substantive VC, the university recorded tremendous achievements such as the matriculation of 1000 undergraduate into five faculties and 39 academic programmes.

“It will also interest you to know that our 1,000 Remedial Students have finished their exams and waiting for placement.

“The University also clinched a gold medal in Basketball, three silver and one bronze medal in athletics, in the just-concluded All African Universities Olympics in Cairo, Egypt.

“The University also won five medals (two gold and three silver) in athletics in the just-concluded NUGA games held at the Obafemi Awolowo University (OAU) Ile-Ife, which qualifies NAU for the next World University Games in Italy by June 2019,” said Prof. Malgwi.