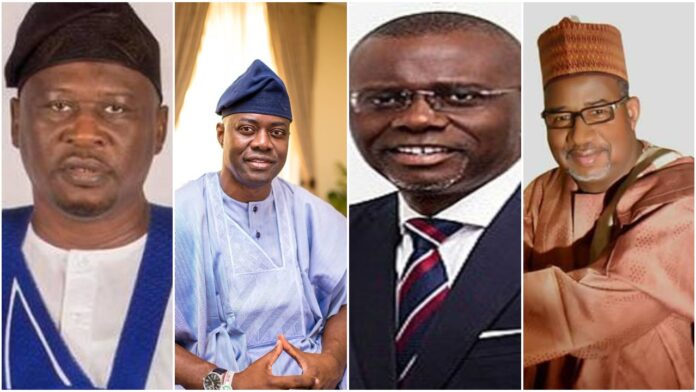 Lagos State Governor, Mr. Babajide Sanwo-Olu today signed his first Executive Order to address the issue of traffic control and management, fixing of potholes on the roads, sanitation as well as cleaning of drainages in the State.

The Order is to also ensure the attainment of zero tolerance for environmental abuse, including illegal and indiscriminate dumping of refuse and construction of structures on drainage points and setbacks.

While signing the Order, the Governor declared: “I think we have to make some points about issues that happen around transportation, potholes on our roads, blockages and rest of it, I think its something we need to tackle immediately”.

The Governor, who signed the Executive Order in the presence of Security Chiefs and the Heads of relevant agencies in the State, stressed that the support and cooperation of military personnel cannot be overemphasised especially in the implementation of the Order.

“Lagosians are not going to wait for us any longer to maintain orderliness on our roads hence, I have invited all the Security Chiefs to witness the signing of the Executive Order so that they can hear us and support us in this regard,’’ he said.

Governor Sanwo-Olu has, therefore, directed the Lagos State Traffic Management Authority (LASTMA) to operate a minimum of two shifts by managing traffic until 11:00pm daily.
“We want to ensure that we control traffic until everybody gets home safely. LASTMA should, therefore, extend its working hours and ensure traffic control till 11p.m,” he said.

Sanwo-Olu also charged LASTMA to effectively carry out their functions by ensuring strict compliance with all extant traffic rules and regulations as prescribed in the enabling law, adding that another pronouncement would be made soon to address the issue of one-way driving on Lagos roads.

Similarly, he directed the Office of Drainage Services in the Ministry of the Environment to commence aggressive cleaning of all secondary and tertiary drainage systems across the State to ensure the free flow of rainwater during the rainy season, just as he directed the Lagos State Public Works Corporation to commence patching and rehabilitation of bad roads.

According to the Governor, the Lagos State Environmental Sanitation Corps has been directed to address the environmental issues in the Executive Order by not necessarily arresting the people but engaging them in effective communication on the need to ensure compliance with the environmental laws.

“Environmental offenders are not meant to be arrested, but communicate with them; the one that we need to reprimand, let us reprimand, the ones we need to advise, let us advise. The people that need to be reformed, reform them,’’ he said, explaining that it is when all these had been done that the law can be implemented fully.

Sanwo-Olu directed the Vehicle Inspection Service (VIS) to be more communicative and advisory on issues of bad vehicle wipers, spare tyres and non-provision of jacks in vehicles, among others.

“These are issues you need to communicate to people, that as we approach the rainy season they must ensure that their wipers are working and their spare tyres are in good condition,” he said.

The Governor further directed LASTMA to come up with recommendations regarding their partnership with private operators of towing vehicles as well as collaborate effectively with LRU to ensure quicker response time to removing broken down vehicles from the roads.