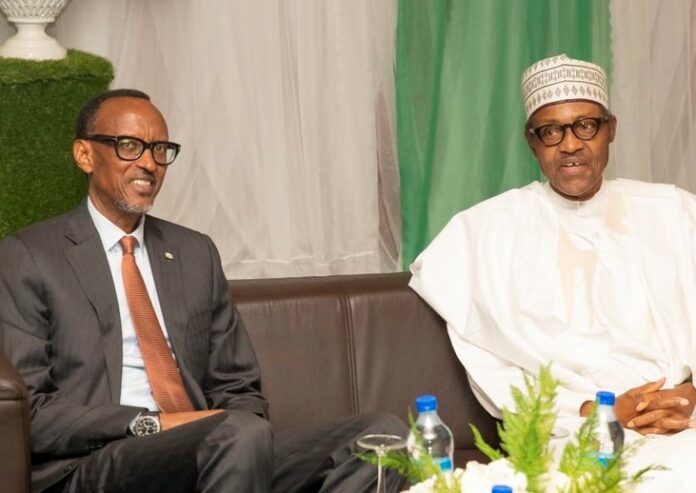 Anti-Corruption: What Kagame, Buhari, Falana Said at Abuja Summit
The President of Rwandan, Paul Kagame, has told President Muhammadu Buhari and other African leaders that it doesn’t take decades to fight corruption. He added that they must refocus their efforts and passion on creating value, wealth and should stop fighting corruption endlessly.

Speaking at the Economic and Financial Crimes Commission (EFCC) summit in Abuja, Kagame also called on the president and other attendees to add value, create wealth, while fighting corruption, and not merely to fight corruption.

“There is one of your own [Ngozi Okonjo-Iweala], who wrote a book titled, Fighting Corruption is Dangerous; so she gave me the book, and as I was looking at the title, I reminded her and said you need to be thinking of writing another book to state that not fighting corruption is even more dangerous.

“This is a fight that can be won; tolerating corruption is a choice, not an inevitability. It is within our power to end it. That is the most important starting point, otherwise, it will be a waste of time to keep talking about it.

“Corruptions does not take decades to eradicate once we decide to break the habit.

“We must discard the myth that corruption is endemic to particular cultures. corruption is a universal weakness, not an African one, and it is not part of our destiny as a continent.

He said research has shown that “the biggest sources and beneficiaries of corruptions are outside of Africa”.

Also Speaking at the occasion, President Muhammadu Buhari appreciated President Paul Kagame of Rwanda for his “enduring personal commitment towards collaborating with the federal government in addressing issues of corruption”.

Speaking on the theme “Curbing electoral spending, a panacea for public corruption”, the president noted that corruption has dire consequences on the Africa continent and urged African leaders, security agencies and the judiciary to come together to fight corruption.

Buhari said corrupt electoral spending manifest in different forms and approaches to curb it should also come in different ways in order to “de-commercialize the political process so that true democracy can survive and thrive”.

“This unwholesome practice has dire consequences on our nations in subverting the exercise of free choice by voters, elevate corrupt and unprincipled individuals to positions of authority and entrenching the structures of democracy devoid of accountability.

“Of course we have sufficient legal framework in place in Nigeria to combat reckless electoral spending the provision of section 90 of the electoral act 2010, as amended, explicitly put a cap on the amount candidates of different political parties must expend, failing which they are violating the law.

“Of greater significance is the provision of section 88 of the act which prohibits a political in Nigeria from possessing any fund outside, or retaining funds or other assets remitted to it outside Nigeria. The philosophical underpinning of all provisions of the act is to prevent desperate politicians from buying their ways into political offices at the expense of low-spending, law-abiding individuals.

“I urge all law enforcement agencies and the judiciary in Nigeria and across Africa to tackle financial corruption in our political system.

“Uncontrolled electoral spending and voter inducement by politicians must be combatted if we want to consolidate true democracy and good governance.”

Buhari also reiterated his commitment to his campaign promises, noting that his administration is taking stock of progress made so far against corruption and assessing what is needed to be done in fighting it.

Adding his voice on the theme of the occasion, a former director of Kenya’s Anti Corruption Commission, Professor Patrick Lumumba, says the fight against corruption in Nigeria is not achieving enough in the area of convictions.

Mr Lumumba, who is widely regarded as an Anti-corruption evangelist, acknowledged the efforts of the EFCC but said the number of convictions is not sufficient.

“We are here gathered here in Abuja, Nigeria to remind ourselves that corruption, especially in the political arena, is dangerous for Africa and dangerous for any country.

“From the videos played on the screen that was played, we have seen monies recovered from individuals who are in other countries, but convictions are not sufficient,” Mr Lumumba said.

He said beyond the convictions, the government should also be “educating the populace and creating an environment where the children of darkness who are the perpetrators of corruption would not have the oxygen to breathe.”

Mr Lumumba said Africans have accepted the fact that corruption can undermine their democracy,

“And I say this because we now realise that corruption can undermine democracy, also realise that when we do not have schools, facilities, and when our young men and women are dying in the Sahara and in the Mediterranean sea is all because of corruption.

“Most important we now recognise that Africa cannot survive if corruption is what we embrace.”

He said corruption has invaded the electoral processes in Africa and especially in its political arena.

“It is not lost on me that conflicts normally emerge after our elections, and corruption has invaded our electoral process and competition in the political arena in many African countries is bad competition

“And therefore it is my hope this symposium would remind us that our future generations will only be safe if we wean ourselves from the menace of corruption.

“I am also glad that I am speaking in the presence of Paul Kagame. The presence of Mr Kagame stands out, some of his few detractors would not want to believe it.

“But he is among the few heads of states who are in the forefront in the fight against corruption. And if any doubts; you should visit Kigali, the cleanest city on the continent. Today Rwanda is the gold birth of how governance ought to be.”

He also said only Norway has been successful in creating “an enabling environment for fighting corruption.”

According to Mr Falana, instead of fighting corruption, the country should be fighting impunity.

He explained that when there is a rule of law the country does not have to celebrate the fight against corruption.

“If you understand the message of President Kagame of Rwanda, there is no way you can fight corruption without addressing wealth creation, without opportunities given to the people,” he said.

“What is also important is that the government also has to create an enabling environment for fighting corruption, and the best country that has done that is the Norway.

“It is very difficult to win the war against corruption, the enabling environment is not there,” Mr Falana explained.

“You may just end up preaching to yourself, and secondly because to be a top to bottom approach, the leaders must show an example, must also demonstrate that they are committed to fighting corruption.

“When you take money meant for a hospital, arms and ammunition and the rest of them, you are breaching the rule of law; so if we have the laws firmly in place, we do not have to waste time.”

He advised the government to first address the basic needs of its citizens before fighting corruption.

Earlier in his address at the occasion, Acting Chairman of the EFCC, Ibrahim Magu, narrated the achievements of the commission in the last four years.

“The convictions secured by the commission since the beginning of this administration reflects a positive progression.

“Despite these records, corruption remains a challenge in our country. I believe that the fight against corruption requires a deeper stakeholder approach. The private and public sectors are critical players in this regard,” he said.

The one-day summit later went into a plenary session, where papers were presented by renowned stakeholders and scholars on how to curb electoral violence and embezzlement of public funds.

The summit, themed “Curbing Electoral Spending: A panacea to Public Corruption”, was held at the Congress Hall of Transcorp Hilton Hotel.

In attendance were guests from the diplomatic community and government, including the President of Rwanda, Paul Kagame; U.S Ambassador to Nigeria, Stuart Symington; Head of the EU Delegation to Nigeria and ECOWAS, Ketil Karlsen; Nigerian state governors and some of their predecessors; former ministers; military and paramilitary chiefs; among many others.

Lift on Twitter Ban, a Triumph in Patriotism and National Security